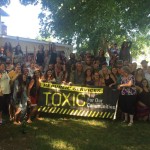 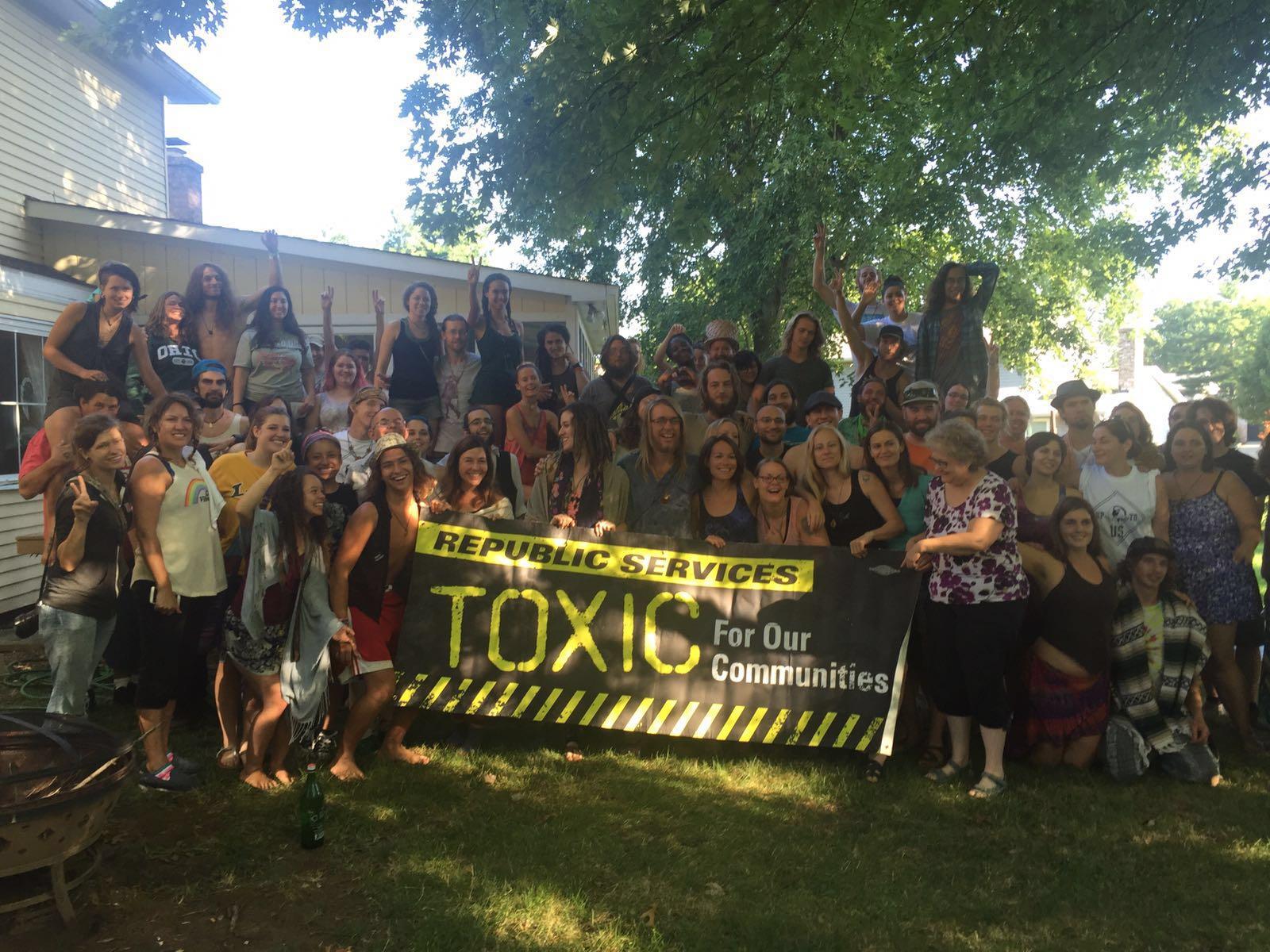 Our crew in Columbus, OH. Can you feel the explosion?
Photo by Harold German Bustamante.

Oh yeah, and a movie star thrown in the mix as well.

If I close my eyes and allow myself to feel the buzz of this movement in my body, there is a sense of acceleration, of forces gathering. There is a sense of a snowball effect, that we are moving at a pace too quick for anyone to stop. 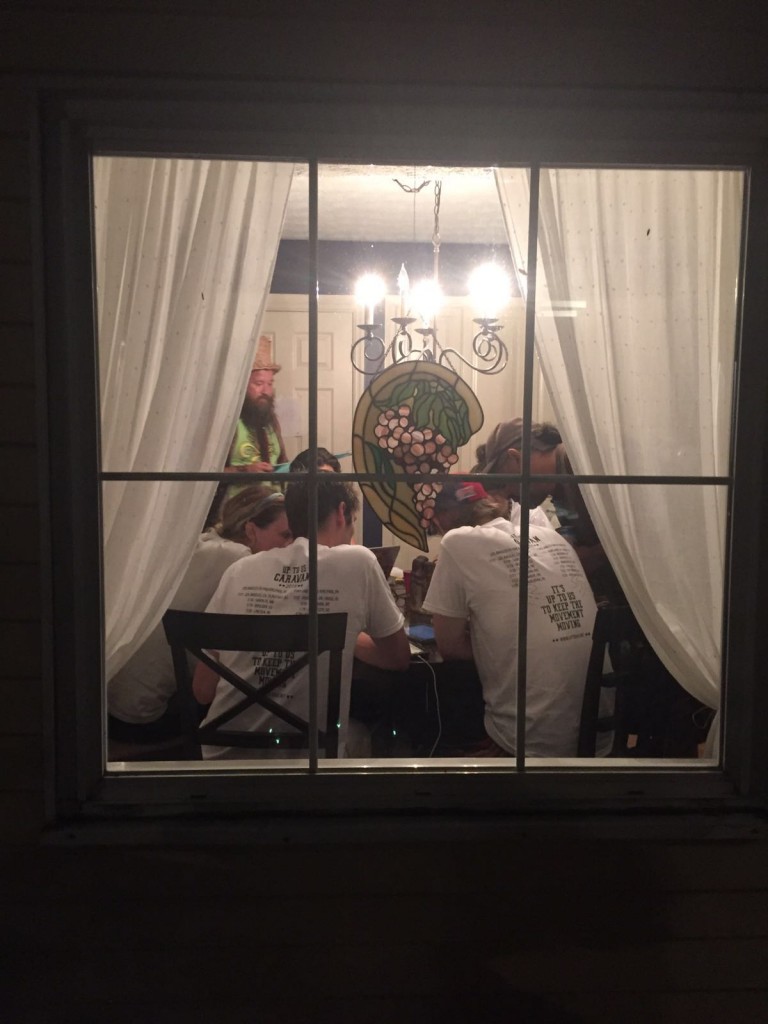 UpToUs organizers putting their brains together for the ongoing process of creating the journey.

If I open my eyes and look around, there is support, respect, naturalness, and of course, love.

Saturday we complete the final leg of our journey, from Columbus to Philadelphia. I asked an organizer how many people total were part of the Caravan now, and he told me there’s no way to know anymore. The crew has made valiant efforts to keep track of cars and participants, but the numbers are becoming a challenge to manage. I would estimate 70-90 people are with us now, and more will meet us in Philly from the northern and eastern Caravan routes.

You might expect a feeling of chaos. It looks like that way superficially: so many faces, bodies, dreadlocks, bare feet. But there is actually a deep peace and trust flowing between us. I am not a stranger to spiritual community, but this is a level of connection I’ve truly never experienced before.

We arrived in Columbus to an outdoor gathering that began with a potluck and featured local speakers on a wide variety of issues: LGBTQ rights, grassroots political activism inspired by Bernie Sanders, and discrimination against the Muslim community were the main points of focus. The aforementioned movie star, Shailene Woodley, spoke to the group about the apparent chaos and compared the process we’re in to a snow globe—everything has to be shaken up before we can witness the beauty of the pieces settling. As protesters, activists, and human beings speaking their truths, we are the ones doing the shaking.

Shailene talked about the anger that so many of us feel but encouraged us to “change the narrative.” She said, “angry narratives never work. What works is demanding and claiming your own narrative, one that’s different from how the media portrays us or what anyone tells us is true. We have to dig deep and think about what our narratives are.”

Moreover, “we have to remember that we’re all in this together. Nobody is the leader of this movement, and nobody is a follower in this movement. We’ve got to all support and take care of each other.”

A local band called Cosmosis played next, and caravan-ers took advantage of the chance to dance and get their blood flowing after several long days on the road. Then we participated in a closing ceremony that may have been the most beautiful experience of my life. 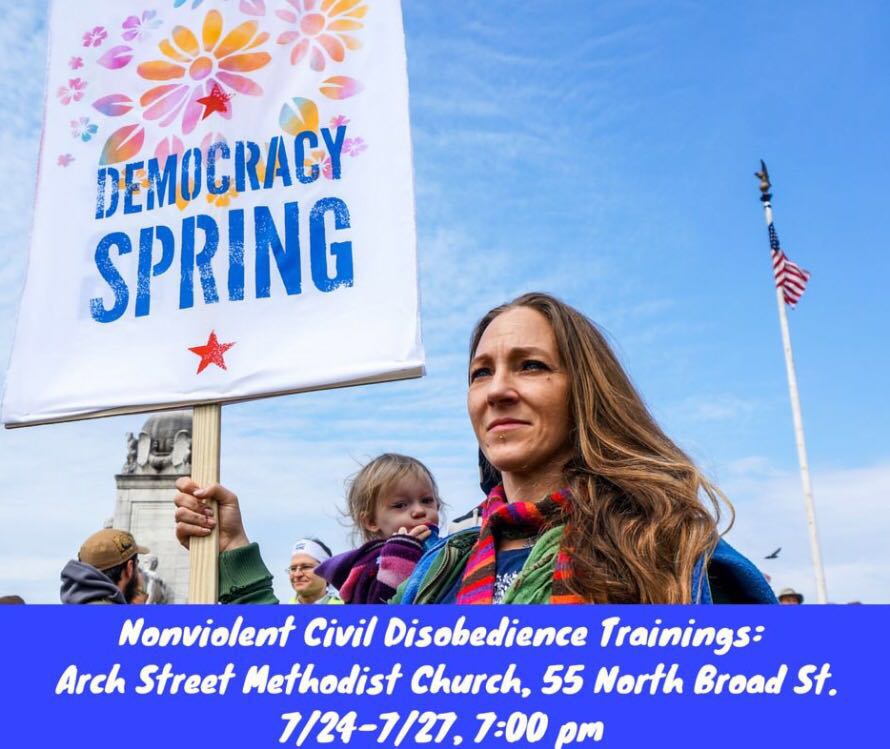 Democracy Spring, an organization that fights corruption in politics through non-violent actions, is holding trainings nightly during the DNC.

We all made a circle and held hands—there were probably around 120 people total. Kelli Love, another conscious musical artist, had the mic. She named several cultures whose ancient prophecies speak of the time we are living in, “the time when the wheel comes full circle, when all the past histories of oppression and violence come to a boiling point, and when we have the opportunity to come together as one people, one tribe, knowing that what affects you, affects me; when you hurt, I hurt.”

She shared a story from a concert in Minnesota two days ago, when she and some others witnessed a young man being arrested by the police in front of the club where they were performing. She said they observed the arrest silently but at the end calmly asked the officers to “take care of our brother, be gentle with our brother.” And the officers looked them in the eye and said that they would.

That’s what this movement is about, she said: “not causing violence, but being brave, and speaking your truth from your heart.”

“No matter what issue brought you here, no matter what injustice you have suffered, we have to remember that violence only adds to that chaos. Violence has gotten us nowhere. We have to be bold, to show up on the front lines of these struggles with love.”

We finished with a musical chant, created by Adam Elfers of the The Gathering, with the words “It’s up to us/to be the change/that we are bringing to this world today.”(You can hear the audio here.)  We filled in the circle, clapped, danced, and sang. Some people held #UpToUs placards. We put our arms around each other – more than one face was streaked with tears. The final sound was a long Om.

Then we headed to the suburbs, and to the scene I described at the beginning of this article: an enormous tribal sleepover, and the feeling that we are an unstoppable force.

I am 31 years old. I know about the 1960s and 70s through a smattering of books, music, and famous quotes; and also through an intuitive sense that the hippies, the protesters, the men and women who at some points literally gave their lives for justice opened a Pandora’s box, the contents of which American society has yet to sort out.

As I write this, I find myself anticipating a reaction from readers who lived through that era: namely, that this is the same as that. That the group songs, the feeling of brotherhood, and the fight for justice are all the same—and, the “end” will also be the same. We are talking about a revolution, just like the progressive pioneers of the 60s. What will come instead will be a doubling down of the oppressive forces, more violence, and a mass “forgetting” of the youthful spirit that fuels our enthusiasm.

Maybe. I make a conscious effort every day to balance hope with realism, and to stay mentally in a place of deep respect for those who have lived more life than I.

But I can’t help thinking to myself something that I’ve also heard several times on this journey by those with a few decades on me: this is different.

The most concrete answer I can give is organization. It exists on a different level than it did in the 1960s, in the form of collaboration between groups and facilitated by the increased communication power offered by the internet. “Tune in, turn on, drop out” is not a motto that would resonate with anyone in this movement—the emphasis here is on action, and mutual support in the process.

There is also something deeper, which I’m still not sure I can articulate, though it is becoming more clear through my current immersion in this “tribe.” It has to do with individual ownership of one’s life. As I mentioned in an earlier article , everyone here – at least whom I’ve spoken with – is doing something pro-active for a better world in their education, their careers, and their everyday lives. There is a huge amount of creativity being exercised. Whether it be through music, writing, activism, marketing, spiritual counseling or engineering, people are developing their passions and gifts and offering their services. And they are supporting one another as part of an organized, communal, greater movement.

I felt this deeply during Friday night’s event in the park, as I backed away from the crowd and took a moment for the past few days to process. I saw a gathering filled not just with the hope of human potential, but of human potential itself, actualized in hundreds of unique ways with an infinite number yet to come. I saw a moment of well-deserved collective celebration in the midst of powerful action.

I know there is a lot of energy on the other side of the spectrum—the anger, fear, and hatred showcased at last week’s Republican National Convention leave no argument about that.

So which way will the arc of history bend?

In my opinion, it will depend on how deeply and strongly we are able to love.

5 thoughts on “Through Ohio, and Deeper Into the Heart”