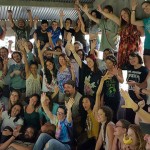 As a reporter, my tendency is to veer away from the nebulous world of human subjective experience; although I am also sharing some personal commentary with you, I want to keep the focus on the facts—my job is to let you know what is actually going on here. But it seems impossible to even begin today’s article without immediately stepping into the emotional realm. 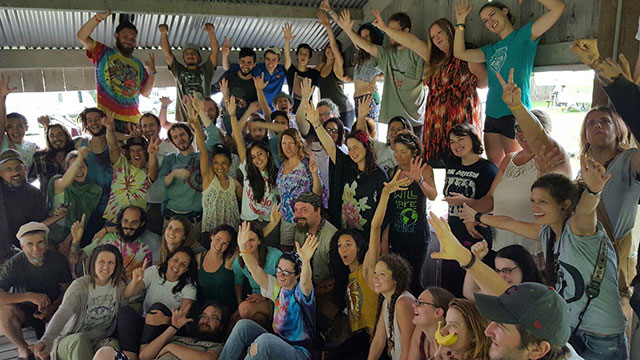 The UpToUs crew at our campsite outside of Ferguson, MO — we’re getting bigger!
Photo: Ethan Au Green.

Amy Jacobs is currently driving from the western US toward the Democratic National Convention in Philadelphia. This is the third article in her series. You can read the second one here.

As I look over my notes from the past 24 hours, that is the thought that pops into my mind.

As a reporter, my tendency is to veer away from the nebulous world of human subjective experience; although I am also sharing some personal commentary with you, I want to keep the focus on the facts — my job is to let you know what is actually going on here. But it seems impossible to even begin today’s article without immediately stepping into the emotional realm.

Early yesterday evening, we arrived in Ferguson, MO, to a community event in the basement of a church. About 100 people were there. We ate a donated meal of pasta and salad with fresh local vegetables and listened to a panel discussion with three racial justice organizers and a fourth activist who works to raise awareness about the heroin use. Almost immediately, the discussion turned towards love.

The panelists were first asked to introduce themselves and share what drives them to do their work. Kayla Reed, a Black Lives Matter organizer who became active after Michael Brown was killed here last August (just a few blocks away from where we sat), shared that although the fight against systemic racism is an integral part of the movement, “the real movement that I want to see starts in each of us. We have to deconstruct what society has taught us. We have to deconstruct racism itself.” 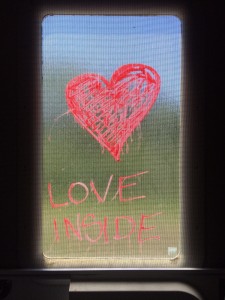 She continued, “We have to actually believe that love is why we do this work.  Love is not a by-product, it’s the actual motivation.”

Timothy Rainberg, the anti-opiate activist, spoke first, saying that he observes an attitude amongst people that “we can just hate things away.” The real way to solve a drug epidemic “is to remember that these are real people, and to love them enough to tell them, ‘you deserve life, you deserve to be here.’”

Steve Lewis, an organizer whose involvement dates back to anti-apartheid activism in the 1980s, said that “love means telling people the truth.” He shared a story of recognizing his own unconscious racism when the first protests he organized attracted only Caucasians. “Love is not pouring sugar on something.  Love is valuing someone enough to point out what they could do better.  Real love comes from honesty and sharing on a human level.”

He went on, “all social movements depend on that kind of real love. And I think that the more politically correct kinds of love have actually hurt movements in the past.”

Jamila Jackson, also an active BLM organizer in the area, said “only love allows you to be tear-gassed, to put your body on the line, to lay down your life.”

And Kayla Reed reminded us that “love is a verb, love is an action. And sometimes it’s a non-action. When a police officer calls me a loud black bitch, and pushes me, the only way I am able to stay peaceful, and keep my hands to myself, is love.”

The discussion went on. I was struck by the presence of all four activists, a certain solidity and confidence that can come only from having a deep connection with oneself. I had sense of both the panel and the gathering as a whole being well-balanced between individuality and interconnection—respect for a variety of perspectives without a loss of awareness of our oneness.

Later that evening, most of the caravan made its way to a campsite which the UpToUs team generously paid for.

For the most part, this is a crew of people who have only met over the past few days.  It was my second evening spending time with everyone and I was amazed at the level of comfort we seemed to have already reached. There was a small pool at the campsite and maybe 20 of us hung out there, talking, singing, and breathing in the humid, 90° night. By the time I went to bed, I realized I had participated in 4 different conversations about what an amazing experience this trip is, especially the fact that the entire group feels like a family.  Then I thought to myself, how did I not know that this was going to happen?

Of course, the settings are very conducive to the quick bonding we’re experiencing, and I recognize that the utopian moment of playing in a pool at midnight is not guaranteed to transfer easily into the demanding world in which all of us live. But I couldn’t help feeling that the mission of establishing true human connection was being actualized at a deeper level with each hug, each listening ear, each word of support. It is an experience of a way of “being” that is not easy to find in our world, and there is something hugely healing and empowering about living it even for a few days.

There is also the fact that we are having this experience in the context of a highly-charged political moment, and as part of an important grassroots action. We are organized. And we are not going home at the end to corporate jobs or conventional lifestyles. We are trying every day to live in a way that is as true to our humanity as possible. This journey is part of the effort.

At the end of the panel discussion in Ferguson, Heidi Harmon, one of the UpToUs organizers, shared that one goal of the project is to “write the narrative for future generations to be born into,” and she quoted a Greek proverb: “a society grows great when old men plant trees in whose shade they know they shall never sit.”

Is there anything wrong with enjoying the experience of planting the trees?

One thought on “Am I really going to write about love again?”