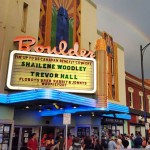 At about 7:30pm on Tuesday, a school-bus sized purple RV pulled up outside the Boulder Theater in downtown Boulder, CO, to cheers from the small crowd outside. The orange “#UPTOUS” painted on the back window declared its affiliation. 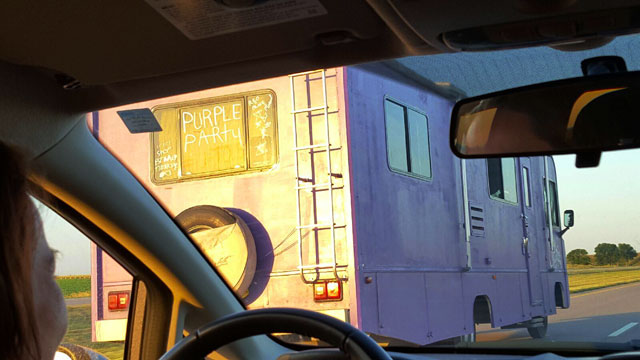 The Purple Party Bus, part of the UpToUs Caravan, on the road in Nebraska. Photo: Ethan Au Green.

Amy Jacobs is currently driving from the western US toward the Democratic National Convention in Philadelphia. This is the second article in her series. You can read the first one here.

At about 7:30pm on Tuesday, a school-bus sized purple RV pulled up outside the Boulder Theater in downtown Boulder, CO, to cheers from the small crowd outside.  The orange “#UPTOUS” painted on the back window declared its affiliation.

Parked on the streets were more cars with similar decorations, like “#SeeYouInPhilly” and “Make the Movement Move.”

In front of the theater doors, an impromptu performance was starting to go down: there was a violin, a guitar, a banjo, some dancing, and a catchy chant of “it’s up to us!” that grew in volume for a few minutes before dissolving.  It had rained earlier in the evening, and at one point a double rainbow appeared, framing the scene on the sidewalk in a brightly colored arch.

Boulder was the third stop of the UpToUs Caravan headed to the DNC in Philadelphia.  I am writing to you now from outside of Lincoln, NE, where we spent our fourth night; we are getting ready to head to Ferguson, MO.  I’ve been in the Caravan’s sphere of influence for about 36 hours now, starting with the concert in Boulder, which featured actress Shailene Woodley as well as performances from Trevor Hall, Nahko Bear, and several other popular artists in what could be called the “conscious music” scene.  The show finished with over a dozen artists on stage together, and an audience of strangers with their arms around each other, singing Bob Marley’s “Redemption Song.” 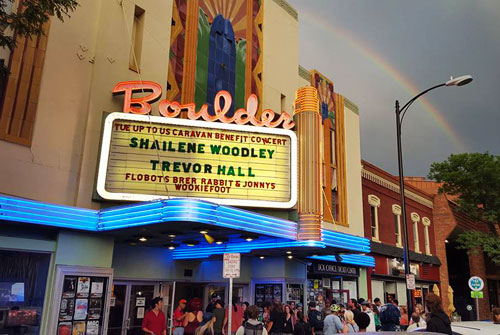 Tuesday evening, most Caravan participants joined about 70 locals for a pre-show event in which Boulder community members shared about progressive issues that are close to home: fracking, the TPP, and the lack of diversity in Boulder are some of the specific concerns that arose.  The intention at each of these community gatherings is to expose those of us headed to Philly to the unique conditions of each location, and to enable us to carry a deeper understanding of the issues affecting our nation to the convention and beyond.

However, just as the UpToUs mission statement expresses, there is also a deeper theme of human connection and authenticity running through the travelers and their purpose.

Adam Elfers, a purple-bus inhabitant and the leader of the “it’s up to us!” chant, told me that he feels the true purpose of the journey – especially the interactions with local communities – to be about “holding space for each other, creating empathy, and the feeling that we are part of each other,=so that we will no longer allow each other to be controlled and manipulated.”

He said, “our biggest task is to form this true, visceral, empathetic network stretching across the country, so that we can stand together and manifest our collective will.”

Adam is based in Dayton, OH, but he flew to Los Angeles last week to join the caravan from the beginning.  He runs an organization called The Gathering, which is a project to unite communities through creative musical events and games. He is one of a few people with whom I’ve had a chance to talk; each one has a unique way in which they are contributing to the world.

One of my fellow passengers is Ethan, who was a protest organizer in the mid-2000s and ran a grassroots journalism website in New Mexico during the time of the Occupy Movement.  The other is Shea, a singer-songwriter fresh off tour in the southwest.  Last night I also spoke with James, who is spending the summer WOOF-ing (the acronym refers to the Worldwide Organization Organic Farmers – WOOF-ing means spending a period of time working on a farm in exchange for food and board) before beginning a Masters program in the fall, studying decentralized waste systems management as an engineer.   I have a feeling that pretty much all of the 30+ people who were gathered at our meeting this morning have similarly distinctive and creative life paths.

During yesterday’s drive through the cornfields of Nebraska, I listened to Planet Waves FM and reflected on Eric’s discussion of the “wall of governance”, the stubborn bureacracy and power structures that anyone attempting to achieve “official” change is bound to encounter.  The image comes to mind of masses of people banging their heads against a brick wall, getting nowhere and coming away frustrated and sometimes bloody.

But when I look at the people around me, as I begin to hear their stories, feel their passion, and sense their humanity, I see a different image: of huge numbers of people quietly chipping away, almost unnoticed, at the foundation of the wall.

I am probably as guilty as any other millennial of underestimating the unyielding nature of the powers that be in America today.  I was a very committed volunteer on the Bernie Sanders campaign over the winter, an experience that opened my eyes to the bias of the mainstream media and the ways that public opinion is manipulated.  Although I recognize that the political revolution is a concept much bigger than one man could ever be, I did for a while believe in the dream of a Sanders presidency. I felt a deep grief the day that Bernie endorsed Hillary—not for the endorsement but for my own naivete.

Yet I continue to witness – and feel in my own heart – the bright potential of the human race.

At our morning meeting, Ann Kleinhez, an UpToUs organizer, spoke a little about our plans for arriving in Philadelphia.  She acknowledged that a lot of groups showing up there are very angry, and reminded us that our intention is to “bring a different kind of conversation, to show up with love and to not forget the humanity of it all.”

Do we have a chance at eroding the foundation of the wall of governance?  I am certainly not in the place to make any optimistic predictions.  But I am reminded of a line from a brand new song called “Dear Brother” than Nahko played at the concert in Boulder that sums up the sentiment of this particular corner of humanity.  The song calls the current American crisis “a love story,” and then asks, “how vain are we to expect a happy ending?”

Even without any promise of success, this is a group of people that are not about to compromise the call of their hearts.