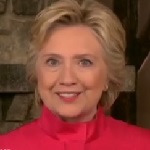 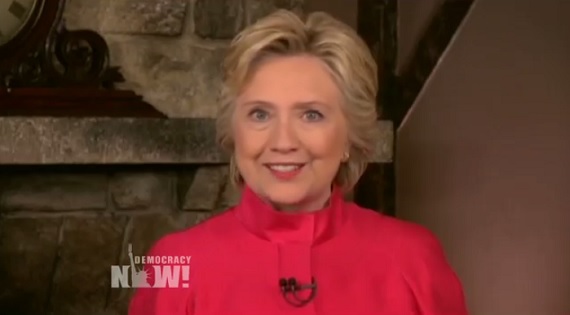 Whatever you might think of Hillary Clinton (and believe us, we know it’s not all good), there’s no denying this is a moment of human progress. Image: video still

Hillary Clinton made history Tuesday when she secured the Democratic Party’s presidential nomination, becoming the first woman to head the ticket of a major party in U.S. history. During the roll call vote at the Democratic National Convention, Bernie Sanders joined the Vermont delegation and moved to give Clinton the party’s presidential nomination by acclamation. Clinton’s nomination was officially seconded by Congressman John Lewis of Georgia.

The historic night marking the first nomination of a woman on a major party’s presidential ticket was not without protest. We speak to some of the hundreds of Bernie Sanders delegates who walked out of the Democratic National Convention soon after her former challenger asked to award her the nomination. “They did not listen to the people,” said Felicia Teter, a New Hampshire delegate. “They did not just ignore us, but they fought against us.”

Democracy Now! was on the floor of the convention speaking to delegates and political leaders from around the country who formerly backed Bernie Sanders and now plan to support Clinton, including AFL-CIO President Richard Trumka, Los Angeles City Councilmember Gil Cedillo, and Jesús “Chuy” García, former Chicago mayoral candidate. “This is really not necessarily about the individual,” says Carol Ammons, an Illinois state representative who introduced Sanders when he spoke in her district. “It is truly about the ideas.”

Broadcasting from the Democratic National Convention in Philadelphia, we host a discussion about how Sanders backers can move forward together with supporters of Hillary Clinton to defeat Republican Presidential nominee Donald Trump. We are joined by Rep. Luis Gutiérrez of Illinois, who endorsed Hillary Clinton last year, and Danny Glover, an actor and activist who endorsed Bernie Sanders.

One of the most moving moments of the DNC came Tuesday when the Mothers of the Movement gathered on the convention stage. They were the mothers of Eric Garner, Trayvon Martin, Jordan Davis, Mike Brown, Hadiya Pendleton, Dontré Hamilton and Sandra Bland, whose deaths spurred the Black Lives Matter movement. We hear from Geneva Reed-Veal, mother of Sandra Bland; Lucia McBath, mother Jordan Davis; and Sybrina Fulton, mother of Trayvon Martin.

Their address marked an “extraordinary moment,” says New Jersey delegate Larry Hamm, chair of the People’s Organization for Progress. But he adds, “I wish someone would have said police brutality must stop. … In the two years since the death of Michael Brown, 2,500 people have been killed by police in the United States.” Both he and Danny Glover say they formerly supported Bernie Sanders and now plan to vote for Hillary Clinton. Glover notes, “What we do beyond the 9th of November is the most important thing.”

As the Democratic National Convention enters its third day here in Philadelphia, one of the city’s most famous native sons is observing and covering the proceedings from inside a state prison facility. Former Black Panther Mumia Abu-Jamal is a well-known prisoner and also an award-winning journalist whose writing from his prison cell has reached a worldwide audience through his Prison Radio commentaries and many books. Abu-Jamal was convicted of the 1981 murder of Philadelphia police officer Daniel Faulkner, but has always maintained his innocence. Amnesty International has found he was deprived of a fair trial.