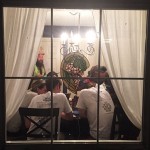 Greetings from Philadelphia! The city of brotherly love, the Liberty Bell, and currently, two thirty-foot-long inflatable joints with the slogans “End the racist drug war!” and “Berned by the DNC!” – among many other fascinating visuals. 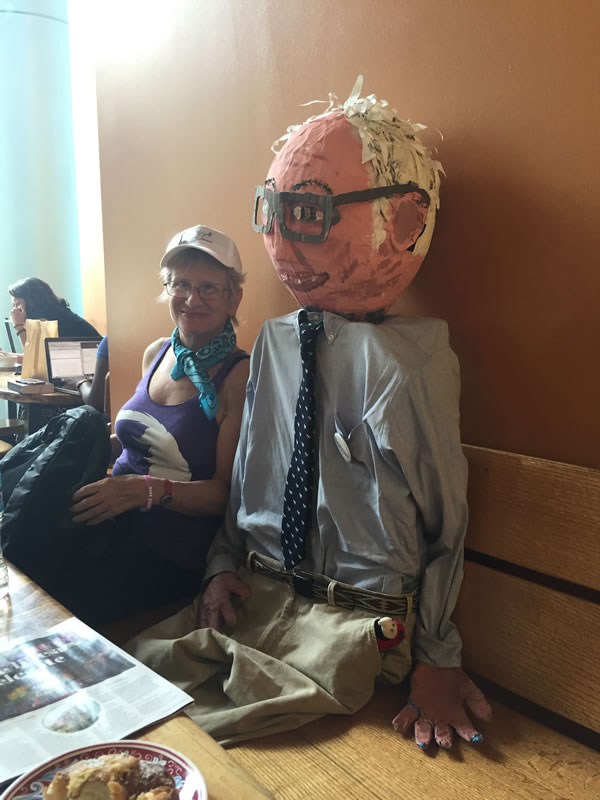 I got a chance to sit next to Bernie Sanders at a coffeeshop in Philadelphia! This friendly doll was just one of hundreds of very creative visuals at the protests outside City Hall. Photo by: Amy Jacobs.

Amy Jacobs has been traveling from the western US toward the Democratic National Convention in Philadelphia. This is the fifth article in her series. You can read the fourth one here.

Greetings from Philadelphia! The city of brotherly love, the Liberty Bell and, currently, two thirty-foot-long inflatable joints with the slogans “End the racist drug war!” and “Berned by the DNC!” – among many other fascinating visuals.

I haven’t had a chance to write for two days, and only have time for a quick update right now. As you can imagine, there is a lot going on here.

I arrived with the rest of the UpToUs crew in Philly on Saturday. We met in a Home Depot parking lot close to FDR Park, where most of the protests are being held, and rolled into the park that evening in a true caravan of 30+ cars, playing Cat Stevens’ “Peace Train” (at least in my car!) and holding our fingers up in peace signs out the windows. Some volunteers wearing Bernie shirts were helping to direct traffic and one of them told me with tears in her eyes that she was so happy to see us.

We’ve been camping for two nights at a big campground about an hour south of the city.

Protesters outside of City Hall in Philadelphia on Monday, carrying one of two giant inflatable joints with their messages; the other one said “End The Racist Drug War!”  Photo by Amy Jacobs.

Sunday night was a rally hosted by UpToUs in collaboration with climate documentarian Josh Fox. There was an outdoor screening of Fox’s latest film, How to Let Go of the World and Love All the Things Climate Can’t Change, and several speakers, including Amy Goodman, Susan Sarandon, Danny Glover, Shailene Woodley and others. They were interspersed with musical performances by Nahko Bear, Xiuhtezcatl Martinez of the Earth Guardians, and at least four other acts, plus a DJ at the end who mixed Martin Luther King Jr.’s “I Have A Dream” speech with techno music for a midnight dance party.

Today our group is migrating into the city more independently. Several rallies and marches are planned, with many different groups collaborating: the largest I’ve heard about is the Occupy DNC March on the Convention, which has almost 30,000 RSVPs on Facebook.

Inside the Convention Center, Bernie Sanders, Michelle Obama, and Elizabeth Warren are scheduled to speak this afternoon, after a series of councils and smaller-name speakers during the day. Barack Obama addresses the convention on Wednesday, and Hillary Clinton will speak before the close of the event on Thursday. 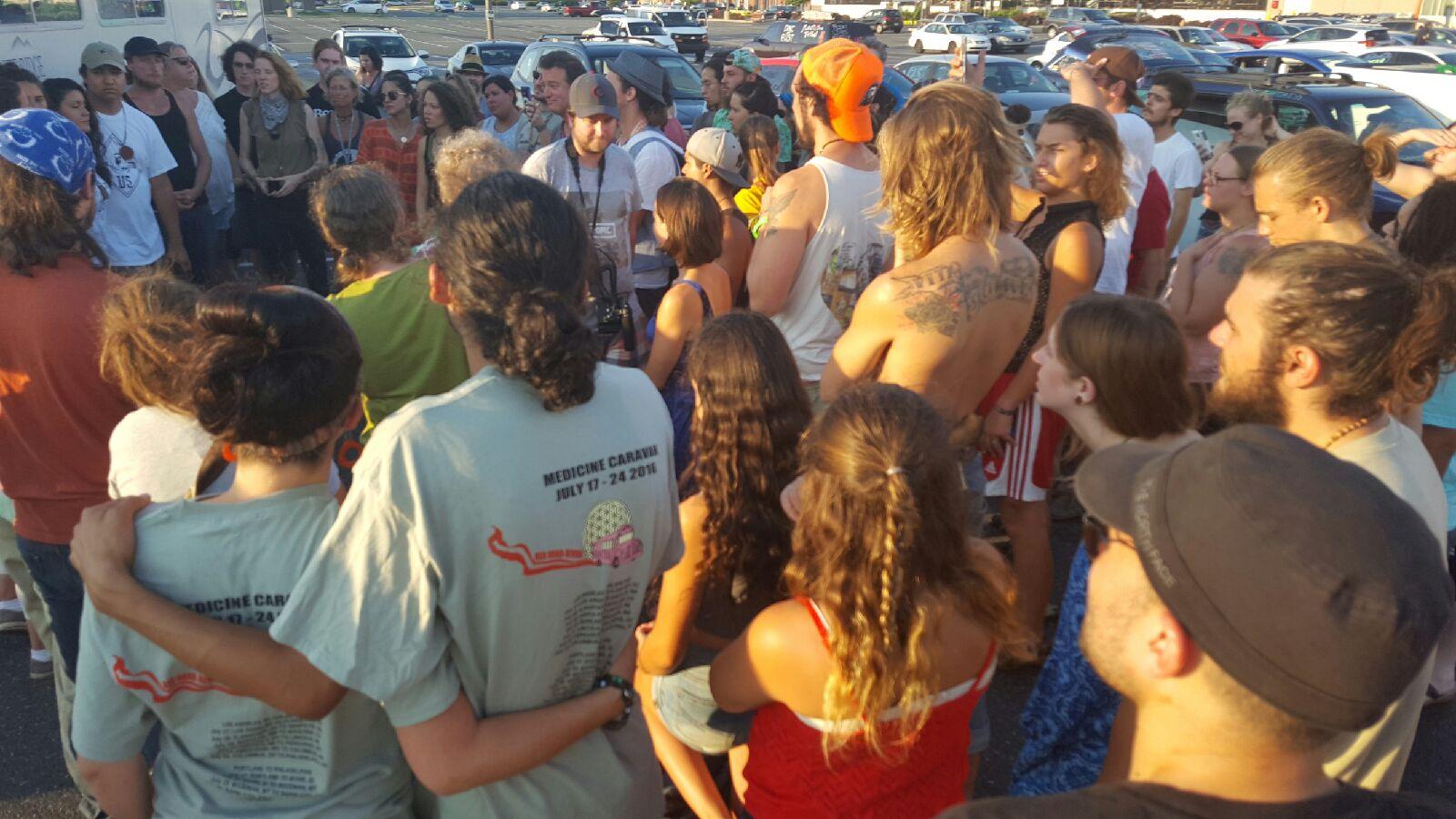 The UpToUs crew circling up before taking our “Peace Train” into FDR Park.
Photo by: Ethan Au Green.

Like the rest of the journey, the past two days have been filled with adventures, challenges and profound experiences. I have so much more to share with you! But now is not quite the time.

I do want to apologize for not responding to reader comments; I’m honored to have the chance to share my experience and would have engaged with you more if my internet access hadn’t been limited to the couple of hours a day when I could sit in a coffee shop. I have read the comments and plan to respond in another article soon.

I also had a chance to do a phone interview with Eric last night from the rally, so listen for my voice on Planet Waves FM on Tuesday!

For now, I am heading back out into the streets! I am hoping to meet up with some friends who are Sanders delegates from Colorado this evening and get the scoop on what’s going on inside the Convention. And as always I will be keeping the window open on the UpToUs Movement and reflecting the human potential being actualized there.

5 thoughts on “The Peace Train Arrives in Philly”