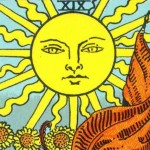 Your keyword for this week’s astrology seems to be ‘energy'; specifically, staying conscious of how you express it. Though it might be necessary first to realize that you need to express anything at all.

Your keyword for this week’s astrology seems to be ‘energy'; specifically, staying conscious of how you express it. Though it might be necessary first to realize that you need to express anything at all. 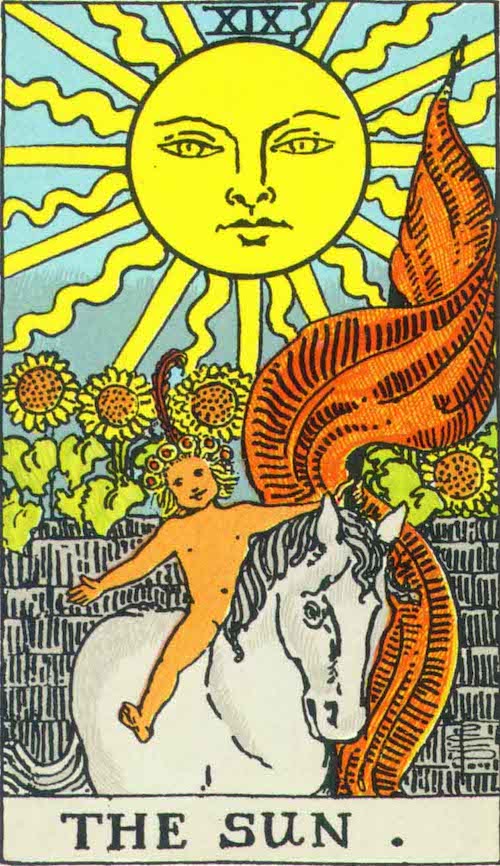 The Sun, from the Rider-Waite-Smith tarot deck.

Aspects suggest it will be extra-important not to sublimate, repress or ignore whatever is trying to push through you and out into the world. That is not the same as simply flinging your energy out willy-nilly or excusing explosive behavior as ‘just how I am’.

Think of it more as staying attuned to what a clear ‘yes’ and clear ‘no’ feel like for you. When you can do that, you can make decisions and take action in a way that not only feels emotionally freer and karmically cleaner, but that also allows those around you to respond with greater clarity.

Astrologically, we’re looking at a set of squares and sign changes this week. First up, Venus in Gemini squares Neptune in Pisces, and Mars in Cancer squares Uranus in Aries, both exact Monday — and both have been in force for days. Eric mentioned that Venus-Neptune “is the aspect of not knowing how you feel, but thinking you know. So it’s wise to interpose a delay between feeling and being certain that’s where you’re really coming from. It will take time to figure out.”

Mars-Uranus squares can get explosive and rebellious regarding restrictions, especially with Mars in emotional Cancer: the more you try to side-step how you’re feeling, the more likely it is you’ll put yourself in a corner and then lash out against the constraints. If you notice explosiveness seems to keep happening ‘to you’, that could be a signal to get real about your own frustrated ego energies. Again: take time to figure out your emotions, and what they’re actually about.

Yet as the Sun and Mars make squares to Uranus, they simultaneously make trines to Chiron, which opens the potential for healing that can emerge from any situation. Remember that when you need it.

On Thursday, Mars enters Leo (a fiery planet in a fiery sign), and the Cancer Sun makes its own square to Uranus in Aries.

Leo is a much more comfortable sign for Mars: enthusiastic, ambitious, dramatic, passionate, courageous. With that much energy coming through, it’s good to remember how to be flexible.

Lust, from the Crowley-Harris Thoth Tarot deck. This card corresponds with Leo.

And that necessity seems to exist, in the form of the Sun square Uranus. There’s a real caution here regarding sudden upsets, accidents and things breaking down — whether that means your car, or a relationship (thanks to ego conflicts).

The key is to find intentional, constructive ways to break your routine and try new things — before push comes to shove. Consciously expressing this energy can help you to avoid accidents, and might lead to new discoveries.

Finally, on Saturday, July 22, the Sun ingresses Leo — the sign it rules, and the heart of the season. Astrologer Isabel Hickey says something about solar Leo that fits particularly well with this week’s overall picture:

Really, that is the question to ask yourself no matter what sign your natal Sun is in, and you don’t need to wait until Saturday. Who is driving your chariot?

How aware are you of your needs, desires, frustrations and impulses — and your ability to express them constructively — as you roll through this week? Here’s why it matters extra: the Sun enters Leo just one day before the first of this year’s two Leo New Moons, which is on July 23. The corresponding Full Moon is the Aug. 7/8 partial lunar eclipse. Our second Leo New Moon will be the Aug. 21 total solar eclipse.

In other words, we’re not only arriving at the heart of the season; we’re about to enter the lunar cycle that directly feeds into (and intersects with) the upcoming eclipse zone. You don’t need to play Apollo and drive the Sun’s chariot across the sky, just your own. The more conscious you stay of what you need to express, the looser you can hold those reins and enjoy the ride to the Aug. 21 eclipse.

9 thoughts on “You Don’t Need to Be Apollo, Just Aware”