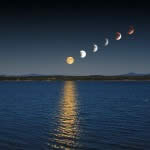 This week opens the first ‘eclipse season’ of 2018. On Wednesday, Jan. 31, we’ll experience the Leo Full Moon, which is also total lunar eclipse — meaning that we’re entering a phase of a couple weeks when you might be able to advance your life in unexpected ways.

This week opens the first ‘eclipse season’ of 2018. On Wednesday, Jan. 31, we’ll experience the Leo Full Moon, which is also total lunar eclipse — meaning that we’re entering a phase of a couple weeks when you might be able to advance your life in unexpected ways. (The corresponding partial solar eclipse will occur with a New Moon in Aquarius on Feb. 15.) 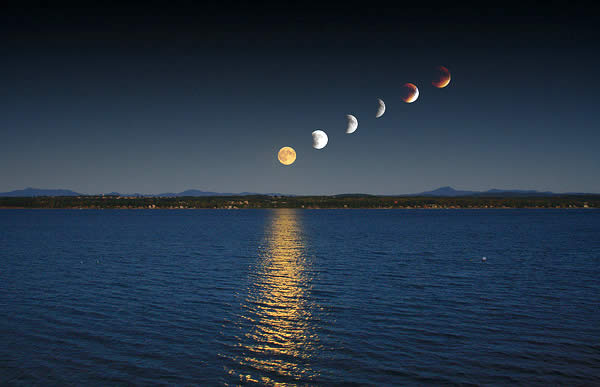 At 8:27 am EST (13:27 UTC) on Wednesday the Moon in Leo will align exactly with the Sun in Aquarius, with the Earth tucked precisely in between (the peak of the eclipse is a couple minutes later).

If you live in the right parts of the world and have clear skies at the right time, you’ll be able to see Earth’s shadow gradually cover the Moon, making it look a reddish-brownish color. But wait: isn’t Wednesday’s Full Moon a blue Moon? Yes, but that name does not actually refer to the Moon’s color; it’s simply the fanciful term given to the second Full Moon in one calendar month (if you recall, the Cancer Full Moon occurred on Jan. 1).

They’re rare, but not as rare as the colloquial saying would seem to suggest. The Jan. 31 Full Moon is also the third in a series of three straight ‘supermoons'; that is, Full Moons that occur while the Moon is closest to Earth in its orbit, and therefore looks slightly larger than usual.

According to EarthSky.org, if you live in North America or the Hawaiian Islands, this lunar eclipse occurs (and will be visible, skies willing) before sunrise on Jan. 31. So if you live in that area and wait until the end of the day on Wednesday, you will have missed the spectacle (but can still enjoy the sight of a full-ish Moon rising). If you live in the Middle East, Asia, Indonesia, Australia or New Zealand, this lunar eclipse will happen for you in the evening hours after sunset on Jan. 31.

Whether you can see the eclipse or not, astrologically speaking you can still use its energy. Interestingly, no sign-ruling planets are making direct, major aspects to the Sun and Moon, other than the Sun and Moon themselves. However, several minor objects are in close aspect to the Full Moon and eclipse.

Sharing the Sun’s degree, which is 12 Aquarius, is the asteroid Industria. At 14 Aquarius we have the asteroids Sappho and Phaethon, with the lunar South Node at 15 Aquarius.

Opposite that in Leo, the Moon at 12 Leo shares its degree with dwarf planet Ceres. The lunar North Node is at 15 Leo. 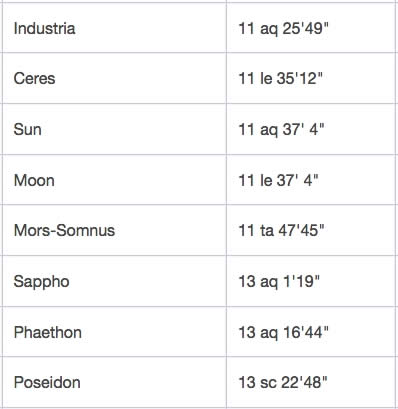 Minor planets and points in close aspect to the Full Moon and lunar eclipse. Full listing at Serennu.com.

Square all of the Aquarius and Leo planets, at 14 Scorpio, is the Uranian point Poseidon (a hypothetical).

Inner growth and development is often spurred when we step into roles and situations that we might not think we are ready for, but which we are in some way being called to. For example, how often have you had to assume a leadership role in a group without feeling like you’re an official or experienced ‘leader’, yet in the process, you discovered some leadership skills you did not know you had?

Or maybe you’ve long dreamed of a certain opportunity, and then out of nowhere it appears — even though you have not learned everything or done all of the preparation you assumed you would have to do to get that opportunity. If you went ahead and said yes to it, chances are you were more ready for it than you thought — or you learned what you needed to ‘on the job’ so that you were able to make the most of it.

The presence of Phaethon in Aquarius suggests that sense of assuming responsibility before you think you’re ready. And yet, with the North Node in Leo, we have an image of inherent leadership ability and the potential to step into your dharma or purpose, despite being faced with that fear or self-doubt. One interpretation of Ceres here could be that taking this kind of step into who you’re becoming and what you’re meant to do is an essential form of self-nourishment and nurturing.

Regarding the cluster in Aquarius, something about Industria in Aquarius — and especially conjunct the South Node — speaks strongly to me of the need to find our way out of the very crystallized pattern of our capitalistic patriarchy. Although we see people championing alternative models of business and industry more and more, the predominant model is still one of elite groups industriously perusing profit for themselves, and ignoring the waste and destruction of the natural world (including the degradation of non-elite human communities). This is the collective karma we’ve inherited as a culture, and many people are waking up to the need to release it and act in accordance with other values.

But what’s Sappho doing there? I tend to associate this asteroid with relationships between women (sexual and otherwise). However, astrologer Zane Stein writes on his website, “Sappho transits often (but not always) refer to a situation where sex or sexual overtones become the issue.”

Consider the current awareness of how “sexual overtones” exist in the tremendously toxic shadow-side of “industry” — in the form of harassment, abuse and dysfunctional power dynamics. Although we’re still in the early stages of trying to address this culturally, the timing of this astrology is striking. 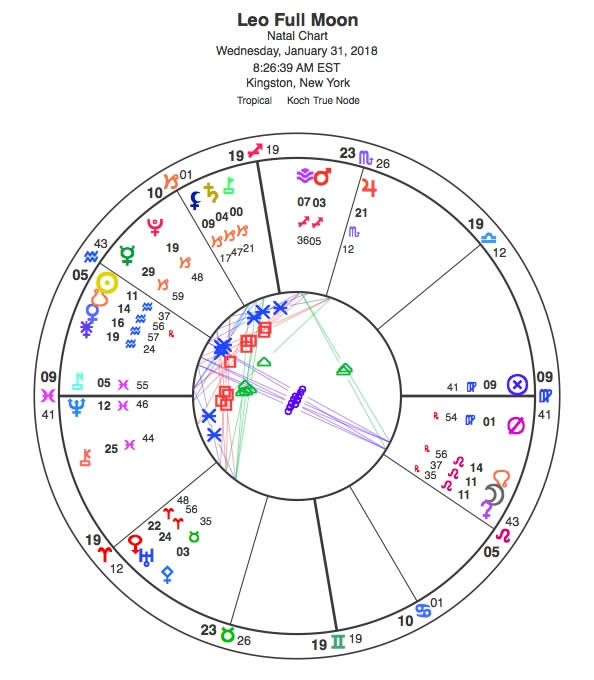 Traditional chart for the Jan. 31 Leo Full Moon and eclipse. You can see the Sun, South Node, Venus and Juno in Aquarius on the left side; North Node, Moon and Ceres in Leo on the right side. Mercury (green critter with horns, upper left) has a bold “29” and smaller “59” next to it, indicating it’s in the last arc minute of the last degree of Capricorn. View glyph key here.

If you’re not sure how you can actively release those sorts of things in your own life, perhaps simply be aware of persisting in old, crystallized social patterns. Even the seemingly ‘new’ patterns of social media and the disposability of digital technology have crystallized quickly, and bear close scrutiny.

Square it all is Poseidon in Scorpio: a hypothetical point relating to spiritual enlightenment, illumination, truth and — tellingly — propaganda and other media. By no means do I think this Full Moon and eclipse will grant anybody instant enlightenment. I do think that it represents the choice we get to make about what we’re seeking and how we go about it: that we need to stay tuned in to our deepest emotions and transformational ability (Scorpio). We also must supply the embodied work (Taurus, the fourth leg of the fixed cross) being asked of us, as we release what’s no longer needed to make room for the new.

Bottom line: as with all eclipse periods, the more you can focus on where you want to take your life, and do the things you love and want to cultivate, the better you’ll orient yourself for the next few months. The idea is to set new patterns for yourself — in my experience, even new patterns of attitude or mindset count, especially if you reinforce it with tangible action.

You can think of it like canoeing down rapids: point yourself in the direction you want to go — downstream, with the current — and then go with the flow. Doing something that brings your heart joy on Wednesday (and the couple days on either side) should help you get things moving in a useful direction.

It’s worth noting that just 10-12 minutes after the Full Moon and eclipse, Mercury leaves Capricorn and enters Aquarius. This is said to be a keen, resourceful, intuitive placement for Mercury: a perfect frame of mind for the Eclipse Zone.

3 thoughts on “Stepping Up to the Blue Supermoon Eclipse”