What are your thoughts about how your more intimate partnerships and friendships exist within a wider community? Even if you tend to prefer one-on-one interactions, those connections are part of a wider network of social groups, some of which may overlap. Today’s conjunction between Mercury and Juno in Aquarius could bring these themes to mind.

“Give up defining yourself – to yourself or to others. You won’t die. You will come to life. And don’t be concerned with how others define you. When they define you, they are limiting themselves, so it’s their problem. Whenever you interact with people, don’t be there primarily as a function or a role, but as the field of conscious Presence. You can only lose something that you have, but you cannot lose something that you are.”
— Eckhart Tolle

The Mother of All Freedoms

On Valentine’s Day, I was eagerly waiting for the White House press briefing to begin. It was delayed several times, hour by hour, and finally the 4 pm scheduled event was canceled. 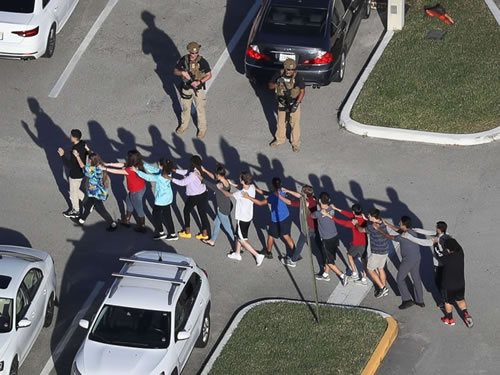 This has become a way of life for American students. Photo: ABC News.

That day’s press briefing would have focused on a newly revealed debacle in the White House, which started as the revelation that Rob Porter, a top staff member accused of beating two of his wives, had been denied security clearance, but was still handling the president’s most highly classified documents.

Security clearance is an elaborate, detailed (but routine) character check, going back to one’s teenage years, to make sure that people who work at the top levels of government are qualified to be handling the nation’s most sensitive secrets — such as the names of American spies working in the Kremlin, pending military plans and anti-terrorist strategies.

This has been turned into a scandal over the White House hiring a wife-beater (who according to press reports was also involved romantically with Hope Hicks, one of the president’s closest advisors), and the president’s position on domestic violence (he’s opposed, thank goodness).

If Your Birthday is Feb. 16
(The Day of Animation) | Aquarius Birthday Reading | All Other Signs
How you describe yourself, what you emphasize, and what you believe, all reveal your feelings about your existence. In particular, choose your words carefully, because they will have a way of sticking to you and becoming true. There is no such thing as a problem without a solution, and whether you see that depends entirely on your state of mind.

Written in the Planets
What are your thoughts about how your more intimate partnerships and friendships exist within a wider community? Even if you tend to prefer one-on-one interactions, those connections are part of a wider network of social groups, some of which may overlap. Today’s conjunction between Mercury and Juno in Aquarius could bring these themes to mind. Or perhaps you’ll notice shifts in how you think and communicate with intimate partners about your needs, versus how you convey the same info to groups, or on social media. If you can discern patterns in any of that, what do they tell you about yourself? Note that Mercury and Juno are also in a sextile to the Galactic Core and centaur Ixion in Sagittarius. What you figure out and communicate now could relate to the greater orientation of humanity; however, for that to be true — and serve the higher good — sticking to your moral compass will be key.