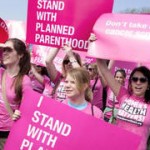 On Friday, Iowa’s governor signed one of the nation’s most restrictive abortion bills. The new law requires any woman seeking an abortion to undergo an abdominal ultrasound, and bans abortion if a fetal heartbeat is detected, which often occurs at six weeks—before many women know they are pregnant.

Cecile Richards on Attacks on Women’s Health, from Iowa Abortion Ban to Rising Violence at Clinics
On Friday, Iowa’s governor signed one of the nation’s most restrictive abortion bills. The new law requires any woman seeking an abortion to undergo an abdominal ultrasound. The law bans abortion if a fetal heartbeat is detected, which often occurs at six weeks—before many women even know they are pregnant. Meanwhile, in South Carolina, Democratic lawmakers used a filibuster to defeat a Republican abortion ban that would have prohibited as many as 97 percent of abortions in the state. This comes as a federal appeals court ruled last month that an Indiana abortion law signed by Vice President Mike Pence when he was the state’s governor in 2016 was unconstitutional. The law restricted a woman’s ability to seek an abortion, including in cases where the child would be born with a disability. Guest Cecile Richards has just stepped aside as president of Planned Parenthood after 12 years. She’s just published a new memoir, “Make Trouble: Standing Up, Speaking Out, and Finding the Courage to Lead.” In the book, she writes, “For the first time in my life, I’m wondering whether my own daughters will have fewer rights than I’ve had.”

“Make Trouble”: Cecile Richards on Her Life Story, Reproductive Rights & Women-Led Activism
From the massive Women’s March against President Trump’s inauguration, to the wave of teachers’ strikes sweeping across red states nationwide, to the #MeToo movement, women have been at the forefront of rising political and social mobilizations challenging the Trump administration’s agenda and the entrenched gender-based violence and white supremacy in U.S. society.

Journalists Rise Up Against Wall Street Hedge Fund Decimating Newsrooms Across the Country
Journalists are orchestrating a rising rebellion against censorship and layoffs implemented by the nation’s second-largest newspaper chain, Digital First Media, and the New York-based hedge fund that controls it, Alden Global Capital. Reporters from Digital First publications around the country will rally outside outside Alden Global Capital’s office here in New York City to demand that the hedge fund either invest in its newspapers or sell them. The hedge fund is known for slashing and downsizing its papers to maintain high profit margins. Since 2010, Digital First Media has cut budgets and staffs at newspapers across the country, including the Oakland Tribune, the San Jose Mercury News and the St. Paul Pioneer Press. In recent months, Digital First Media cut 30 percent of the newsroom at The Denver Post. Meanwhile, the private company reported profits of almost $160 million in 2017 and a 17 percent operating margin—far higher than other newspaper publishers.