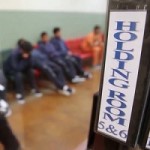 It has been nine weeks since the Trump administration sparked a national crisis by forcibly separating more than 2,500 migrant children from their parents at the U.S.-Mexico border. Most were seeking asylum from violence in their home countries of El Salvador, Honduras and Guatemala.

Despite Today’s Court-Ordered Deadline, More Than 900 Migrant Children Remain Separated from Parents
It has been nine weeks since the Trump administration sparked a national crisis by forcibly separating more than 2,500 migrant children from their parents at the U.S.-Mexico border. Most were seeking asylum from violence in their home countries of El Salvador, Honduras and Guatemala. Instead, the parents were charged in federal court with a crime for illegally crossing the border, then held in jail and detention. The children, some still breastfeeding, were sent to shelters around the country. Today is the deadline federal District Judge Dana Sabraw set to reunite these families. But the process has been chaotic, and the government admits at least 900 children have yet to be reunited, and some 463 separated parents have been deported—even as their children remain in U.S. detention centers. Officials say the parents voluntarily agreed to leave their children behind. But in court papers filed Wednesday, the ACLU argued many parents say they were coerced or misled into signing forms they could not read, and were confused about what they were agreeing to. Two immigration lawyers, Ofelia Calderón and Carlos García, are both representing and providing pro bono assistance to parents separated from their children, some of whom have still not been reunited by today’s court-imposed deadline.

Iraqi-American Pediatrician Mona Hanna-Attisha on the Trauma of Child Separation & the Travel Ban
As more than 900 children remain separated from their parents, Dr. Mona Hanna-Attisha, a pediatrician from Flint, Michigan, who helped expose the dangerous levels of lead in the city’s drinking water after testing blood lead levels in children, speaks on the issue. The Iraqi-American doctor has just published a new book titled “What the Eyes Don’t See: A Story of Crisis, Resistance, and Hope in an American City.” We talk to Dr. Mona Hanna-Attisha about Trump’s immigration policies, the Muslim travel ban and her family history.

As Death Toll Rises in Flint, Dr. Mona Hanna-Attisha on Her Fight to Expose Lead Poisoning in City
A new report by PBS “Frontline” has found the death toll from the water crisis in Flint may be higher than Michigan officials have acknowledged. The state has admitted 12 people died following an outbreak of Legionnaires’ disease after the city switched its water supply to the Flint River in an attempt to save money. But according to PBS “Frontline,” the city also saw a spike in pneumonia deaths during the water crisis. Some of these deaths may have actually been caused by Legionnaires’ disease. Between April 2014 and October 2015, 119 people died of pneumonia in Flint—a jump of 46 percent from that same time period a year earlier. More than a dozen state and city officials are facing criminal charges in part for failing to alert the public to the risk of Legionnaires’ disease during the Flint water crisis. On Wednesday, Nick Lyon, the former head of the Michigan Department of Health and Human Services, was in court for a hearing to determine whether he will stand trial on manslaughter charges.