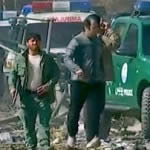 In Afghanistan, Islamic State militants have carried out an early-morning attack on a military academy in the western outskirts of the capital of Kabul, killing at least 11 troops and wounding 16. This marks the latest in a wave of deadly attacks this month.

“Unprecedented Level of Violence” in Heart of Kabul as Taliban Sends “Clear Message” to Trump
In Afghanistan, Islamic State militants have carried out an early-morning attack on a military academy in the western outskirts of the capital of Kabul, killing at least 11 troops and wounding 16. This marks the latest in a wave of deadly attacks this month. Monday was already declared a national day of mourning in Afghanistan, after a Taliban attacker drove an ambulance filled with explosives into the heart of the city on Saturday, killing at least 103 people and wounding as many as 235. One week earlier, Taliban militants killed 22 people at Kabul’s Intercontinental Hotel. Last week, another six people were killed in an assault claimed by the Islamic State on the office of aid group Save the Children in the eastern city of Jalalabad. This comes as the United States has stepped up its assistance to Afghan security forces and its airstrikes against the Taliban and other militant groups.

With Larry Nassar Sentenced for Sexual Abuse of 160 Female Athletes, Many Now Ask: Who Else Knew?
Michigan’s attorney general has launched an investigation into Michigan State University, and the entire board of directors of USA Gymnastics is resigning, after team doctor Larry Nassar was sentenced to up to 175 years in prison last week for sexually assaulting and abusing more than 160 young female athletes. Reporter Mark Alesia, part of the investigative team at The Indianapolis Star, which broke the story, discusses his latest story, “What’s next for USA Gymnastics? A long, tough road at best.”

“Are You a U.S. Citizen?”: Trump Could Sabotage the 2020 Census by Adding Controversial Question
The Trump administration says its request to add a question on citizenship status to the 2020 census is under legal review. Data from the once-a-decade census has major implications for shaping the political landscape. The population count is used to determine how congressional seats are distributed across the country and where hundreds of billions of federal dollars are spent. Critics say that including a citizenship question on the census will deter undocumented residents from participating in the questionnaire out of fear that the government could use the information against them. Trump’s request to add a citizenship question to the 2020 census would “sabotage the entire census,” says Ari Berman, senior writer at Mother Jones, and “massively depress responses among immigrant groups.”

“We’re Living in a Rigged System”: Ari Berman Says GOP Uses Gerrymandering to Stay in Power
Ari Berman, senior writer at Mother Jones and a reporting fellow at The Nation Institute, speaks about his new for piece for Rolling Stone titled “How the GOP Rigs Elections.” “We like to think in this country, if you get the most votes, you’re the winner. But that’s not how it works, because of gerrymandering right now,” Berman notes.