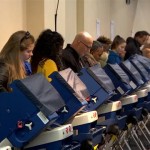 Millions of voters head to the polls today for a midterm election that’s widely seen as a referendum on Donald Trump’s presidency, with both houses of Congress and 36 governor’s races in the balance.

36 Million in U.S. Cast Early Votes, Shattering Records for Young People & People of Color
Millions of voters head to the polls today for a midterm election that’s widely seen as a referendum on Donald Trump’s presidency, with both houses of Congress and 36 governor’s races in the balance. In fact, millions have already voted: A record 36 million Americans voted early this year, with participation high among young people and people of color. That’s up from 27 million four years ago, leading many to predict a record turnout for a midterm election. “If you look at the numbers, early voting is shattering records among young people, among people of color,” says Ari Berman, senior writer at Mother Jones. “We’re seeing a lot more people that typically sit out midterm elections going and showing up because they believe these races are so important.”

“Smoking Gun” Evidence Shows Trump Admin’s Top Anti-Immigrant Officials Trying to Rig the Census
We look at a federal trial underway in New York City that could overturn the Trump administration’s plans to put a citizenship question on the 2020 census. Voting rights activists fear the question will deter immigrants from participating in the census, leading to a vast undercount in states with large immigrant communities. This could impact everything from the redrawing of congressional maps to the allocation of federal funding. The citizenship question was announced in March by U.S. Commerce Secretary Wilbur Ross, who touted it as a way to enforce the Voting Rights Act and protect minorities against voter discrimination. But on Sunday evening, the plaintiffs released a deposition that seems to contradict the Trump administration’s stated purpose for adding the citizenship question to the census. We speak with reporter Ari Berman, who has been following the case and says, “The fix was in from the very beginning. This was done by Kris Kobach, Steve Bannon, Jeff Sessions—the most anti-immigrant figures in the Republican Party.” Berman’s newest story is headlined “Trial over Census Citizenship Question Kicks Off Amid Revelation of Trump Administration Deception.”

Women of Color Hope to Make History in 2018 Election with Wins in Congress and Governor’s Races
A historic number of women of color are running for public office in today’s election. At least 255 women are on the ballot as congressional candidates, including a record number of women of color. In Georgia, Stacey Abrams hopes to become the state’s first black governor—and the country’s first black woman governor. Meanwhile in New Mexico, Deb Haaland could become the nation’s first Native American woman to serve in Congress. Amid a rash of racist ads by Abrams’s opponent Brian Kemp, there is something “deeply transformational about the electoral organizing and the campaign that Stacey Abrams represents,” says Aimee Allison, president of Democracy in Color and founder of She the People.

Oil & Gas Industry Giants Spend Millions in Attempt to Defeat Anti-Fracking Proposition in Colorado
Colorado voters have managed to get a statewide anti-fracking measure on the November ballot. Proposition 112 would require companies to place new wells at least 2,500 feet from homes, schools, waterways and other areas designated as “vulnerable.” This distance is two-and-a-half to five times the current state regulation. The initiative is unprecedented in its scope because it potentially bars new wells on 95 percent of land in top-producing counties. Industry executives are watching with concern, fearful that Proposition 112 could encourage similar measures across the nation. In response, the oil and gas industry has spent millions to defeat Proposition 112, while at the same time putting millions of dollars behind a different measure on the ballot that would amend the constitution to allow property owners to sue their local governments for regulating industries like fracking. David Sirota, investigative reporter for Capital & Main is interviewed.

Florida’s Amendment 4 Would Restore Voting Rights to 1.4 Million People with Nonviolent Felonies
Florida voters are preparing to vote on Amendment 4, a measure that would restore voting rights to 1.4 million people with nonviolent felonies who have fully completed their sentences. One in five African Americans in Florida and 10 percent of the state’s adult population are ineligible to vote because of a criminal record. Across the United States, more than 6.1 million people with felony convictions are not eligible to vote. Florida is one of just four states that bar them from voting for life. In October, Amy Goodman traveled to Melbourne, Florida, and spoke with Desmond Meade, the president of the Florida Rights Restoration Coalition, who is a formerly homeless returning citizen who is leading the fight to re-enfranchise people with felony convictions in Florida.