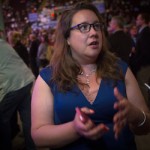 On Saturday, the Maine Democratic Party convention became the first state convention to vote to abolish superdelegates, through an amendment that will go into effect in 2020. Is this the start of a national trend? With retrograde Mercury conjunct the Sun in the sign of values, Amanda Painter considers the implications. 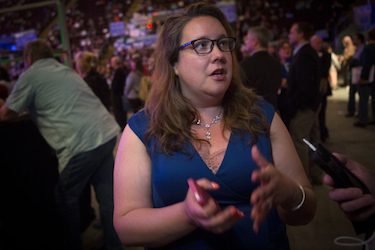 Rep. Diane Russell, D-Portland, speaks on May 7 about a successful amendment she introduced forcing Maine’s superdelegates to vote in proportion to the results of the caucuses at the Maine Democratic Convention in Portland. Photo by Troy R. Bennett | BDN

With the rule change, superdelegates’ votes will be allocated proportionally according to the overall popular vote. The amendment is non-binding for this year and will take effect in 2020.

But before I go any further, what is a superdelegte, anyway?

It’s a little confusing; and technically the Republican Party does not have “superdelegates” in the way the Democratic Party has them (see Wikipedia here). People filling the role of Democratic “superdelegate” include distinguished party leaders and elected officials, including all Democratic members of the House and Senate and sitting Democratic governors. They automatically get seats at the Democratic National Convention, and are free to support any candidate they choose for the nomination; that is, their votes for the nomination do not have to reflect how their state voted during the primary season.

This means superdelegates can potentially swing the nomination vote at the national convention to a candidate who did not receive the majority of primary votes. It’s for this reason that many people see the system as “rigged” and not actually representative of a truly democratic process.

It seems the Democratic Party has long swung back and forth on how much or how little influence party leaders should have at the convention. If I understand correctly, after the 1968 convention, changes were implemented to make the composition of the convention less controlled by established party leaders.

But those changes took part of the blame for “weakening” the democratic tickets of George McGovern and Jimmy Carter. So in 1982, the superdelegate system was devised (with adjustments in ensuing years) to bring back more influence by party leaders. Superdelegates tend to prefer candidates with more Washington experience.

On Feb. 12, 2016, Debbie Wasserman Schultz, chair of the Democratic National Committee, was asked by CNN’s Jake Tapper, “What do you tell voters who are new to the process who say this makes them feel like it’s all rigged?”

Unpledged delegates exist really to make sure that party leaders and elected officials don’t have to be in a position where they are running against grass-roots activists. We, as a Democratic Party, really highlight and emphasize inclusiveness and diversity at our convention, and so we want to give every opportunity to grass-roots activists and diverse committed Democrats to be able to participate, attend and be a delegate at the convention. And so we separate out those unpledged delegates to make sure that there isn’t competition between them.

This sounds great — who on the Left doesn’t love inclusivity and activists? But does it really work that way?

It would seem that fewer and fewer people buy that story — and certainly not Millennial voters.

Maine representative Diane Russell (D-Portland), who introduced the amendment, noted that a number of county delegates wanted to preserve the superdelegate system, but she said their opinion “was not well-received by the convention.”

“Their arguments were basically ‘respect your elders’ and ‘remember McGovern,’” Russell said. “But if the party wants to engage and bring in younger people, they can’t turn around and tell them to wait their turn.”

According to U.S. Uncut, the amendment also stipulates that the Maine Democratic Party will now petition its Democratic National Committee members to move to get rid of the superdelegate system altogether, at the national level.

“I hope people will stop focusing on the superdelegates themselves and instead focus on the system,” Russell said. “But that’s really something that has to happen at the national level.”

Russell is not the only person to voice those senteiments. In a Planet Waves email conversation, Len Wallick called superdelegates “a form of institutionalized oppression designed to keep We The People of the United States of America from bringing the USA’s plutocracy to
heel. Superdelegates are a hypocrisy for any party which calls itself democratic.”

Once upon a time, people were fond of saying, “As Maine goes, so goes the nation.” It does not always hold true, nor should it (cough…Gov. Paul LePage). Given that Mercury is retrograde in the sign of values — and the Maine Democratic convention passed the amendment just two days before Mercury transited the Sun today — it remains to be seen whether this sparks a trending return to more authentically democratic values in concrete ways.

2 thoughts on “As Maine Goes: No More Superdelegates!”