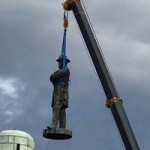 New Orleans has removed the last of four Confederate statues in recent weeks. Workers wore bulletproof vests and face coverings to conceal their identities as they used a crane to remove the statue from its pedestal. White nationalists have staged a series of protests and issued threats in the lead-up to the memorials’ removals.

As Last Confederate Statue Is Removed in New Orleans, Will School Names & Street Signs Follow?
New Orleans has removed the last of four Confederate statues in recent weeks. Workers wore bulletproof vests and face coverings to conceal their identities as they used a crane to remove the statue from its pedestal. New Orleans Mayor Mitch Landrieu said threats and intimidation necessitated the overnight work and extra safety precautions. White nationalists have staged a series of protests and issued threats in the lead-up to the memorials’ removals. Though the four most prominent Confederate monuments have been removed, activists are calling for New Orleans officials to remove all monuments, school names and street signs in the city dedicated to white supremacists.

From Jerusalem, Nathan Thrall of the International Crisis Group notes leaders on both sides are unsure what to expect from Trump, who made negative comments about Israel on the campaign trail. “That’s really the locus of the fear on the Israeli side with respect to Trump,” Thrall says. “It’s the notion that he could really try and exert pressure on Israel, threaten real consequences in the U.S.-Israeli relationship, if Israel were not to agree to, let’s say, the outlines of an American proposal for a settlement of the conflict or the outlines of an American proposal on which the two sides would negotiate and work out the details.” Thrall argues that if Trump uses his leverage, “we’re looking at a totally different Israeli-Palestinian peace process than we have seen in the past.”

What Impact Will the Manchester Bombing Have on Israel-Palestine Peace Process?
In Manchester, UK, at least 22 people were killed in a bombing at a concert arena at the end of a performance by American pop star Ariana Grande. Dozens more were wounded in the explosion, which appears to be a suicide attack. ISIS has now claimed responsibility. Nathan Thrall, senior analyst at the International Crisis Group, who is in Jerusalem and discusses the impact of the attack on the region. “It makes things harder for the Palestinians, because this news was then used to highlight the issue of Palestinian terrorism and the issue of payments to families of Palestinians who have fought against Israel and been killed or imprisoned.”

U.S. Extends Temporary Protected Status for Haitians, But Will Mass Deportations Follow in 6 Months?
In a partial victory for the Haitian-American community, the Department of Homeland Security announced Monday it has extended Haitians’ temporary protected status (TPS). Tens of thousands of Haitians were given TPS after an earthquake devastated their country in 2010, and the new extension will allow them to continue to legally reside and work in the U.S. for the time being. If the Trump administration refuses to extend TPS after the six-month reprieve expires, up to 55,000 Haitians could be forcefully repatriated to their fragile, struggling homeland. Human rights advocates note Haiti is still reeling from Hurricane Matthew, which in October 2016 destroyed the country’s southwest peninsula. The hurricane killed more than 1,000 people and decimated villages and farmland. Haiti is also suffering from a devastating cholera epidemic that erupted after the earthquake. We get response from Jumaane Williams, New York city councilmember for District 45. His district represents one of the largest populations of Haitians in the United States.

https://www.democracynow.org/2017/5/23/nyc_councilman_on_parade_honoring_oscar
Upon the release of longtime political prisoner Oscar López Rivera, New York City’s Puerto Rican Day Parade organizers have chosen to honor Rivera as the parade’s first “National Freedom Hero.” This prompted the city’s police chief to boycott the event. “You shouldn’t be telling people who their heroes should or shouldn’t be,” responds Jumaane Williams, New York city councilmember. In 1981, López Rivera was convicted on federal charges including seditious conspiracy—conspiring to oppose U.S. authority over Puerto Rico. In 1999, President Bill Clinton commuted the sentences of 16 members of the FALN, but López Rivera refused to accept the deal because it didn’t include two fellow activists, who have since been released. In January, President Obama commuted Oscar López Rivera’s sentence. He was finally freed earlier this month.