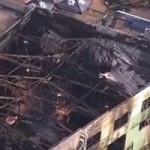 Mourning continues in Oakland after the death of at least 36 people in a fire at the Ghost Ship warehouse, where the victims were overwhelmingly young artists, activists and community organizers.

Mourning continues in Oakland after the death of at least 36 people in a fire at the Ghost Ship warehouse, where the victims were overwhelmingly young artists, activists and community organizers. Many local artists and tenants’ rights activists say the fire is a symptom of a failed urban housing policy where rising rents have forced people to live and make art in sometimes hazardous spaces. “We need safe spaces to be able to come into the light and to stop treating artists like criminals,” says guest Nihar Bhatt, a Bay Area DJ and record label owner who survived the warehouse fire but lost seven friends.

President-elect Donald Trump has picked fast-food CEO Andrew Puzder to become the next secretary of labor. Puzder is a longtime Republican donor who has been a vocal critic of raising the minimum wage, the Fight for 15 movement, expansion of overtime pay, paid sick leave and the Affordable Care Act. Puzder is also an anti-choice activist who has been accused of domestic violence.

Donald Trump attacked union leader Chuck Jones on Twitter this week, after the president of United Steelworkers Local 1999 appeared on CNN criticizing Trump for breaking his promise to Carrier workers in Indiana. “I am proud of what Chuck Jones did,” says Mary Kay Henry, international president of the Service Employees International Union, which represents 2 million workers in healthcare, public and property services. “We’re going to need to stand up and speak out and have each other’s backs, and call out the lies of this administration and make it crystal clear that we are not backing down.”

A Wisconsin judge is set to decide if a recount of the state’s presidential vote can proceed. Green Party presidential candidate Dr. Jill Stein has requested recounts in three states where Donald Trump narrowly beat Hillary Clinton: Wisconsin, Michigan and Pennsylvania. But Stein has faced obstacles in all three states. Today’s hearing in Wisconsin comes after two pro-Trump groups, the Great America PAC and the Stop Hillary PAC, filed a federal lawsuit seeking to stop the recount process. Meanwhile, in Michigan, a judge has already halted the recount. Another hearing will be held in Pennsylvania today to decide if a recount there can begin.