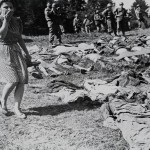 By Cheryl Corson I am a Jew whose great grandparents were murdered by Nazis. Real ones. Not Nazi impersonators, not Nazi reenactors, not Nazis in drag or Nazi wannabes. My great aunt was made to dig a mass grave which she and her fellow Jewish prisoners then stood at the edge of and fell into […] 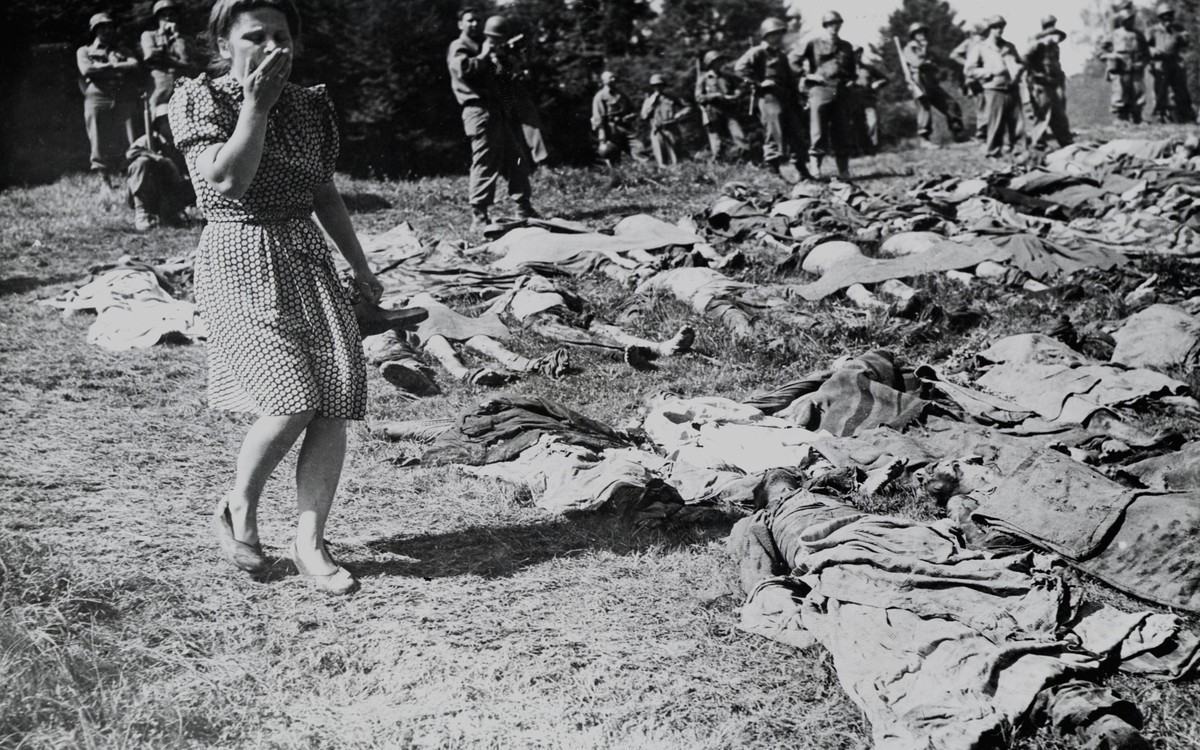 A German girl expresses horror at the sight of the decomposing bodies of slain victims of the Nammering mass murder. German civilians of Nammering were ordered by Military Government officers of the 3rd U.S. Army to view the exhumed bodies of 800 slave laborers, murdered by SS troops during a forced march from Buchenwald and Flossenburg Concentration Camps.

I am a Jew whose great grandparents were murdered by Nazis. Real ones. Not Nazi impersonators, not Nazi reenactors, not Nazis in drag or Nazi wannabes. My great aunt was made to dig a mass grave which she and her fellow Jewish prisoners then stood at the edge of and fell into as they were shot. Not dead, she lay there until dark; then crawled over corpses and escaped to freedom. My great aunt. May her memory be a blessing.

Using the term “Nazi” for Americans violently pursuing an ethnic cleansing agenda only maintains a rhetorical distance between us so we don’t have to think of ‘these people’ as Americans or, as Terry McAuliffe so ineptly put it, as Virginians. It rhetorically neutralizes Hitler and the real Nazis, while demonizing and separating our countrymen and women. The language hurts both ways.

My therapist is not alone in saying that it’s better for this all to come out [repressed rage over Obama being President]. But was it better for my Russian and Polish relatives that it did? It’s only good for it to come out within a civil society following the rule of law, in the spirit of truth and reconciliation. And that is not the ground against which this escalating mob violence occurs.

The melting pot that never existed is boiling over. I feel unsafe. Not as unsafe as any black American behind the wheel of any car, but as unsafe as anyone whose Bubbie was shot into a mass grave might reasonably be expected to feel.

As a writer and designer, it seems like these armed Americans could at least design their own flag and pick their own damn name. Maybe in the kitschy 50s tradition of backwardly spelled words — IZAN might not be too much of a mental strain. And choreograph a new damn salute while they’re at it.

What Robert Mueller’s no-doubt-successful investigation will reveal is massive, life-long money laundering and tax evasion by Trump and his entire family and legal team. This is likely to be greeted by armed civilian militias just like those we saw in Charlottesville, who will consider any grand jury finding invalid.

In DC, near where I live, the streets, grand public spaces, and the Metro will become unsafe. Curfews, mandatory IDs, checkpoints, even frozen assets are not too far-fetched to imagine. Screenings for and against this or that will become the norm, just as they have for years at the entry of any DC museum or airport.

Does a 240-year-old country have the strength and wisdom to work through this when the very ideals laid out by the founders fail to acknowledge their fundamental strategic domination and exploitation? Can the conflict be resolved by the very representatives of those who created it? Why would they want to?

At a south Jersey flea market yesterday I picked up an old volume of the Lincoln and Douglas debates of 1858. Worth reading if you want to see how far we haven’t come.

These are the thoughts running through me today as I work on designing new outdoor environments in which children can play and learn. I pray they will be learning peace.