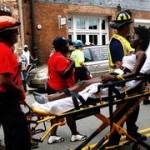 The “Unite the Right” white nationalist rally in Charlottesville, Virginia, this weekend erupted into violence, resulting in three deaths. Today’s Democracy Now! hosts a discussion on the aftermath, the implications and official responses to the events.

Survivor of White Supremacist Attack in Charlottesville: There’s No Question, This was Terrorism
The “Unite the Right” white nationalist rally in Charlottesville, Virginia, this weekend erupted into violence, resulting in three deaths. After a torchlit march of hundreds on the University of Virginia campus Friday night, more than 1,000 white nationalists descended on the city on Saturday to oppose a plan to remove a statue of Confederate General Robert E. Lee from a city park. They were met by anti-racist counterdemonstrators, and fights broke out before the rally began. Witnesses report police did little to intervene. Shortly after the protest began, a man later identified as James Alex Fields drove his vehicle into a crowd of counterdemonstrators in what many are calling an act of terrorism. A local paralegal named Heather Heyer was killed in the attack, and at least 19 others were injured. Two Virginia state troopers also died Saturday when their helicopter crashed en route to the scene of the violence. On Saturday, Trump addressed reporters at his golf resort in Bedminster, New Jersey, blaming the violence in Charlottesville on “many sides.”

Cornel West & Rev. Toni Blackmon: Clergy in Charlottesville Were Trapped by Torch-Wielding Nazis
Violence erupted in Charlottesville, Virginia, over the weekend as thousands of neo-Nazis, KKK members and other white nationalists began descending on the city to participate in the “Unite the Right” rally. Thousands of counterprotesters met in Charlottesville, including clergy, students, Black Lives Matter activists, and protesters with the antifascist movement known as “antifa.” Rev. Traci Blackmon is executive minister of Justice and Witness Ministries of the United Church of Christ. During a live interview with MSNBC at the march on Saturday, she was forced to flee as counterprotesters were attacked around her. Cornel West was also on site and describes the scene.

UVA Prof on UVA’s Historical Ties to KKK & White Nationalist Alums Richard Spencer & Jason Kessler
Jalane Schmidt, an organizer with the local Black Lives Matter movement and an associate professor of religious studies at the University of Virginia, describes the school’s history of connections to the KKK and its alumnus, white nationalist leader Richard Spencer.

Rev. Traci Blackmon: The Trump Administration Is Giving Permission to Hate
On Saturday, Trump addressed reporters at his golf resort in Bedminster, New Jersey, blaming the violence in Charlottesville on “many sides.” Rev. Traci Blackmon, executive minister of Justice and Witness Ministries of the United Church of Christ, responds. “What is happening under this current administration is permission to hate,” Blackmon says.

2 thoughts on “Survivor of White Supremacist Attack in Charlottesville: There’s No Question, This was Terrorism”