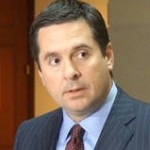 A showdown is brewing in Washington as the White House prepares to release a controversial Republican memo. The four-page memo, written by Republican Devin Nunes, purports to show that the FBI abused its power when it began surveilling Trump campaign adviser Carter Page in 2016.

Marcy Wheeler on Showdown over Nunes Memo, Mueller Probe & Reauthorization of Mass Surveillance
A showdown is brewing in Washington as the White House prepares to release a controversial Republican memo despite opposition from the FBI, the Justice Department and Democratic lawmakers. The four-page memo, written by House Intelligence Committee chair, Republican Congressmember Devin Nunes of California, purports to show that the FBI abused its power when it began surveilling Trump campaign adviser Carter Page in 2016 due to his dealings with Russia. Supporters of President Trump claim the memo offers proof that the FBI’s investigation was tainted by politics from the start, in part because the FBI won approval of the wiretap by citing a dossier funded by supporters of Hillary Clinton. On Wednesday, the FBI, which is led by Trump appointee Christopher Wray, issued an unusual statement criticizing the imminent release of the memo, saying, “[W]e have grave concerns about material omissions of fact that fundamentally impact the memo’s accuracy.”

16 Years of War: Trump Joins Obama & Bush in Using SOTU to Hail “Progress” in Afghan War
On Tuesday night, President Trump became the third president in a row to attempt to put a positive spin on the war in Afghanistan—the longest war in U.S. history. Five years earlier, President Barack Obama predicted at his 2013 State of the Union that the war would soon be over. And back in 2006, President George W. Bush used his State of the Union to praise Afghanistan for building a “new democracy.” More than 16 years after the U.S. War in Afghanistan began, the country remains in a state of crisis. On Saturday, more than 100 people died in Kabul when an ambulance packed with explosives blew up. Then, on Monday, Islamic State militants carried out an early-morning attack on a military academy in the western outskirts of the capital of Kabul, killing at least 11 troops and wounding 16. Investigative reporter May Jeong is in Kabul. Her most recent piece for The Intercept is titled “Losing Sight: A 4-Year-Old Girl Was the Sole Survivor of a U.S. Drone Strike in Afghanistan. Then She Disappeared.”

Johann Hari on How the “Junk Values” of Neoliberalism Drive Depression and Anxiety in the U.S.
The United States is one of the most depressed countries in the world. Could it be because of the country’s adoption of neoliberal economic policies? Johann Hari is the author of a controversial new book, “Lost Connections: Uncovering the Real Causes of Depression—and the Unexpected Solutions.” He writes, “Junk food has taken over our diets, and it is making millions of people physically sick. A growing body of scientific evidence suggests that something similar is happening with our minds—that they have become dominated by junk values, and this is making us mentally sick, triggering soaring rates of depression and anxiety.”