Honesty is the best policy because the truth always comes out. Being real with others keeps your power in your hands, to express your reality your way in your time, rather than being forced to. In doing so, you will have an impact on others, and that would seem to be the real issue.

Exuberant Astrology, With a Note of Caution 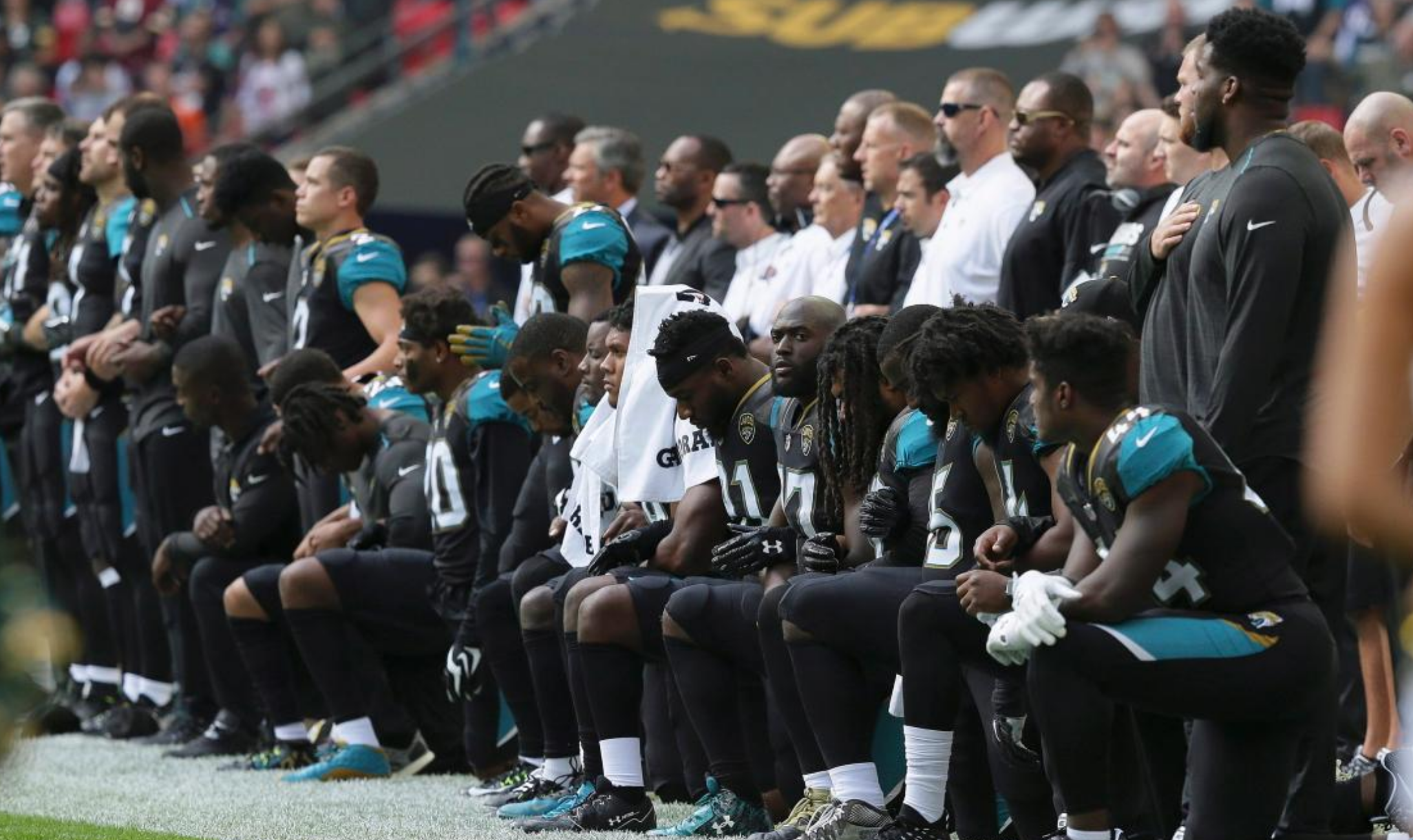 Jacksonville Jaguars players kneel down during the U.S. national anthem before a game against the Baltimore Ravens at Wembley Stadium in London on Sept. 24, 2017. (They stood for the playing of “God Save the Queen.”) The symbolic gesture, which spread nationwide this weekend, comes two days after Trump’s harsh comments on players who don’t stand during “The Star-Spangled Banner.” NFL player Colin Kaepernick began kneeling during the national anthem last year as a way to peacefully protest U.S. police brutality against African Americans. Photo by Tim Ireland/AP.

This week offers yet another interesting and complex round of astrology, all on the heels of the Libra equinox. Here in the Northern Hemisphere, the scales of that sign have tipped in the direction of night being longer than day. This also begins a new season, with the attendant surge of power coming from the Earth, in all hemispheres.

The new Libra Sun is distinguished this year by a long conjunction to Vesta, the brightest asteroid. The Sun has been gradually aligning with Vesta, which will be exact at 10:17 am on Wednesday, Sept. 27. 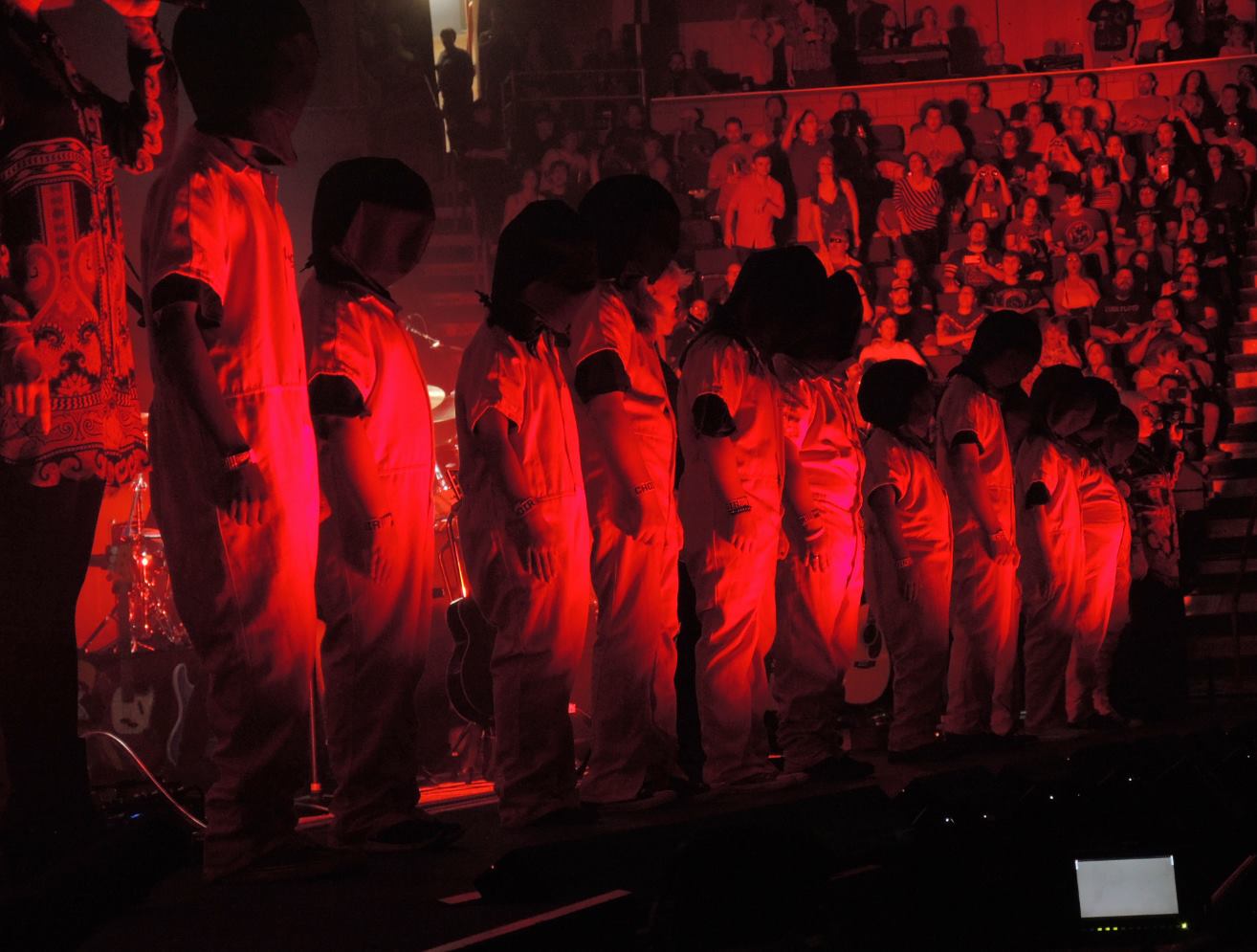 Music students from the Albany School of Rock came out on stage wearing execution hoods and prison jumpers during the Roger Waters concert last night. This was during the song “Another Brick in the Wall Part Three” (we don’t need no education, we don’t need no thought control: that one). They removed the outfits to reveal black shirts that said RESIST. Photo by Eric Francis.

Libra is generally held to be the sign of relationships, of “you and me.” The presence of the mighty Vesta in this scene is holding open the space for the kinds of relationships that are usually considered taboo, inappropriate or the result of seeming failure.

Vesta is the sigil of spiritual growth dictating the form of relationship rather than life revolving around devotion to the concept of a partner. (Autocorrect substituted the word “parent” for my original mistyping of “partner,” which is accurate: partnerships that are based on parental relationships.)

In any event, Vesta holds space; whether we’re talking about the hearth, which is a tribute to her, or the presence of the Vestal priestesses at all Roman government functions in the days of the empire. There was some understanding in that time that the ever-devoted Vestals provided protection for the empire, and that it would be vulnerable should their order of priestesses ever end; that turned out to be true (another story).

If Your Birthday is Sept. 25
(The Day of the Symbiotic Satirist) | Libra Birthday Reading | All Other Signs
Honesty is the best policy because the truth always comes out. Being real with others keeps your power in your hands, to express your reality your way in your time, rather than being forced to. In doing so, you will have an impact on others, and that would seem to be the real issue. Be not afraid to use your power, and change the world.

Written in the Planets
Mercury in its home sign of Virgo squares Saturn in Sagittarius. Meanwhile, Chiron forms another exact contact with Pholus (also in Sagittarius) as part of their long-term square. This might in one sense address the importance of skepticism and discernment in deciding what to believe. If you’re inclined to accept a particular point of view without question, try to understand why. More than anything else, this is about doing your intelligence justice by thinking things through. You can reach your own opinion from the facts. 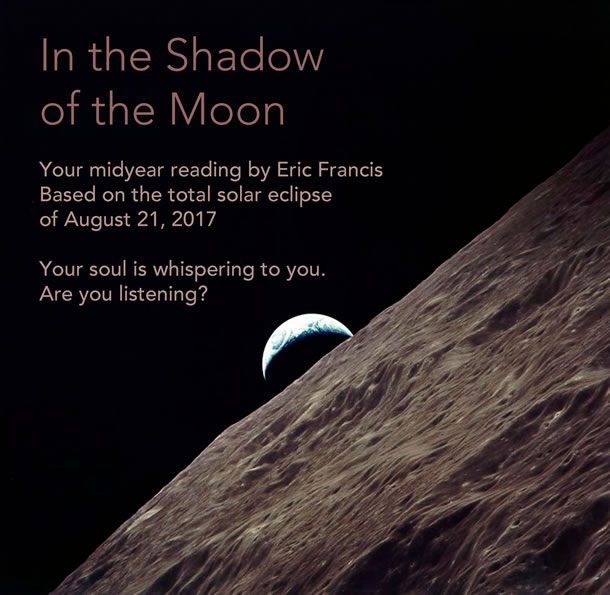 In the Shadow of the Moon, the exciting 2017 Midyear Reading by Eric Francis, is now published. Although the video readings for all 12 signs use the Great American Eclipse of Aug. 21 as a starting point, Eric develops the themes through some of the most important astrological events you’ll encounter in the remainder of 2017 and beyond. We’ll be increasing the price again very soon, so don’t hesitate to order your copy here. You can also choose your individual signs here.