The New Hampshire primary saw clear victories for Bernie Sanders and Donald Trump — a sign of division between the voting public and party leaderships. 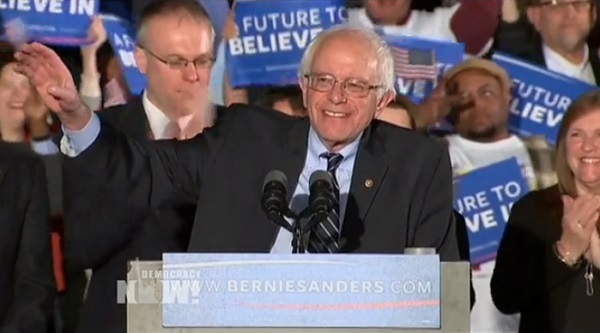 The New Hampshire primary saw clear victories for Bernie Sanders and Donald Trump — a sign of division between the voting public and party leaderships. Amy Goodman discusses both results with Arnie Arnesen, a long-time New Hampshire reporter. Here’s a quote from Arnie during the interview:

This is not surprising. This is about establishment politics. What Bernie Sanders showed — and, to some extent, even Donald Trump has shown — is that this is no longer a time for establishment politics, that there is a problem. There is a disconnect between what they do and what they think and what the American people are feeling. Bernie tapped into that, not just in New Hampshire, but around the country. And I think it really is not only a message of change, but it’s a message of incrementalism that actually not only is not working, but — here’s the most important thing: Do you know why we’re doing this incremental change? Because when you see so much money in politics, what the money interests are doing are not only buying interest, but they are making sure they retard the change. They are holding back the change.