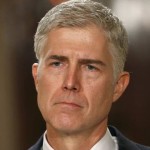 President Donald Trump has announced his pick for the Supreme Court to replace the late Justice Antonin Scalia: Judge Neil Gorsuch. He’s a member of the Federalist Society and is widely seen as conservative jurist.

President Donald Trump has announced his pick for the Supreme Court to replace the late Justice Antonin Scalia: Judge Neil Gorsuch. He’s a member of the Federalist Society and is widely seen as conservative jurist. As a judge on the Tenth Circuit, Neil Gorsuch ruled in favor of Hobby Lobby in the case deciding whether the company could refuse to provide birth control coverage to employees as required by Obamacare. Judge Gorsuch also has a long history of ruling against employees in cases involving federal race, sex, age, disability and political discrimination and retaliation claims. Senate Democrats have vowed to filibuster his nomination. Guests are Ian Millhiser, senior fellow at the Center for American Progress Action Fund and justice editor of ThinkProgress, and Nan Aron, president of the Alliance for Justice.

“Stolen Seat”: A Look Back on How Republicans Blocked Obama’s Supreme Court Nominee
President Trump was only able to nominate Judge Neil Gorsuch to replace the late Justice Antonin Scalia because the Republican-led Senate refused to consider Obama’s nominee for the post last year. Obama nominated Judge Merrick Garland on March 16, but Republican senators refused to hold confirmation hearings for months. Many are now calling Gorsuch’s nomination a “stolen seat.”

President Bannon?: Racist, Islamophobic Breitbart Leader Consolidates Power in Trump White House
President Trump took the unprecedented step of giving Bannon a full seat on the “principals committee” of the National Security Council last week. Bannon has emerged as one of the most powerful figures in the White House. On Tuesday, The New York Times ran an editorial posing the question “President Bannon?” The Times wrote, “We’ve never witnessed a political aide move as brazenly to consolidate power as Stephen Bannon—nor have we seen one do quite so much damage so quickly to his putative boss’s popular standing or pretenses of competence.” For more, Amy Goodman spoke to Josh Harkinson, senior reporter at Mother Jones. His recent article is headlined “The Dark History of the White House Aides Who Crafted Trump’s ‘Muslim Ban.'”

Rev. Jesse Jackson: Confirming Sessions as Attorney General Would Stick a Knife Through MLK’s Work
On Tuesday, Senate Democrats managed to delay a vote on Jeff Sessions’s nomination for attorney general. The move comes amid continued protest against Jeff Sessions over his history of opposing the Voting Rights Act and his history of making racist comments. On Monday, about 10 members of the NAACP, including President Cornell William Brooks, were arrested at a sit-in at Sessions’s office in Mobile, Alabama. It was the second NAACP sit-in against Sessions’s confirmation where Brooks and others were arrested. Reverend Jesse Jackson, founder and president of Rainbow/PUSH and a Democratic presidential candidate in 1984 and 1988, offers comments.