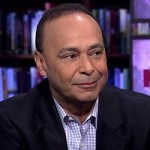 After the meeting, Trump said any potential deal would rely on also approving “massive border security.” On Monday morning, dozens of undocumented activists and their allies shouted down Congressmember Pelosi during her news conference, accusing her of using DREAMers as “bargaining chips” in her meeting with Trump. The protesters demanded protections not only for DREAMers, but for all 11 million undocumented immigrants living in the United States.

Trump’s Childhood Home is Now an Airbnb Where Refugees Slept Over to Protest Immigration Crackdown
This past weekend, a surprising gathering took place at Trump’s childhood home in Queens, New York. The home is now an Airbnb. On Saturday, the international humanitarian and development organization Oxfam America rented out the home for refugees to spend the day there sharing their stories of home, resistance and life in the United States. This comes as The New York Times reports that Trump is now considering whether to further reduce the number of refugees allowed into the United States to fewer than 50,000.