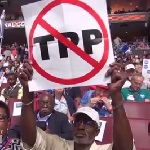 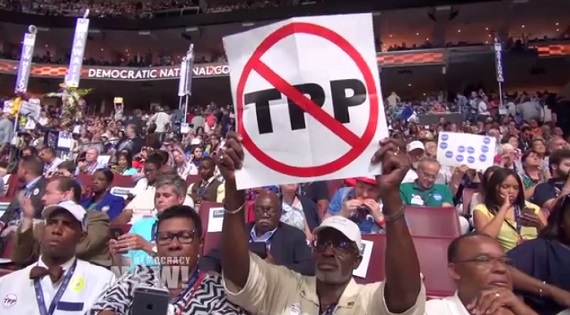 The tumultuous opening of the Democratic National Convention in Philadelphia began one day after Democratic National Committee Chair Debbie Wasserman Schultz resigned following the release of nearly 20,000 emails revealing how the Democratic Party favored Hillary Clinton and worked behind the scenes to discredit and defeat Bernie Sanders. On Monday morning, protesters booed and heckled Wasserman Schultz at a Florida delegation breakfast.

Hours later, Senator Bernie Sanders spoke about the DNC email scandal in a meeting with his delegates. Later in the meeting with his delegates, the room erupted into boos when the Vermont senator repeated his support for Hillary Clinton. Supporters of Sanders chanted “Run! Run! Run!” and “Bernie or Bust!” The tension continued on to the floor of the DNC hours later. Democracy Now! was on the floor at the opening gavel of the convention and spoke with several delegates.

The show hosts a debate between Green Party presidential candidate Dr. Jill Stein and Ben Jealous, former NAACP president and CEO and a Bernie Sanders surrogate. Later there is a second discussiion between Clinton supporter Robert Reich, who served as labor secretary under President Clinton, and Chris Hedges, a Pulitzer Prize-winning journalist who backs Sanders.

Before the Democratic National Convention officially began on Monday, Democracy Now! was there when Senator Bernie Sanders addressed his 1,900 delegates and threw his support behind his former rival, Hillary Clinton. Today’s show features highlights from the night’s speeches and speak with several Sanders delegates, who say “it pains me,” but that they now plan to vote for Clinton. Others say they remain undecided and are at the DNC to ensure Sanders’s values are represented.