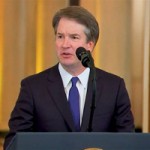 President Trump has nominated federal Judge Brett Kavanaugh to fill Anthony Kennedy’s seat on the high court. Kavanaugh has deep ties to the Republican Party and will push the Supreme Court further right if he is confirmed.

Who Is Brett Kavanaugh? Inside the Right-Wing History of Trump’s Supreme Court Nominee
President Trump has nominated federal Judge Brett Kavanaugh to fill Anthony Kennedy’s seat on the high court. Kavanaugh has deep ties to the Republican Party and will push the Supreme Court further right if he is confirmed. Kavanaugh served as a senior aide under President George W. Bush in the White House Counsel’s Office. He has similar credentials to Supreme Court Justice Neil Gorsuch. Both clerked for Anthony Kennedy, and both are backed by the Federalist Society and Heritage Foundation, who drew up a list for Trump in 2016 of suitable right-wing judges to consider for the Supreme Court. Ian Millhiser is senior fellow at the Center for American Progress Action Fund and the editor of ThinkProgress Justice. His latest piece is headlined “Who is Brett Kavanaugh, Trump’s pick to replace Anthony Kennedy?”

“It’s a Very Scary Time for Women”: Cecile Richards on Brett Kavanaugh and the Future of Roe v. Wade
President Trump has nominated Judge Brett Kavanaugh to fill Anthony Kennedy’s seat on the Supreme Court. While running for president, Trump openly vowed to only nominate justices who will overturn Roe v. Wade. Last year, Judge Brett Kavanaugh ruled against an undocumented teenager who sought to have an abortion while in federal detention. He said allowing the abortion would make the government “complicit” in something that is morally objectionable.

Lives Are At Stake: The Struggle to Stop Trump’s Right-Wing Takeover of the Supreme Court
Activists and organizers around the country are mobilizing against President Trump’s Supreme Court nominee Brett Kavanaugh, who needs a simple majority of 51 votes in the Senate to be confirmed. If Kavanaugh fills Justice Anthony Kennedy’s seat, it will likely create the most conservative court the United States has seen since the 1930s.

ACLU vs. Trump: David Cole on the Fight to Reunite Children Separated from Parents at Border
The Trump administration will not meet today’s deadline to reunite all migrant children under the age of 5 whom immigration officials took from their parents at the border and then sent to jails and detention centers across the country. The Justice Department says it will reunite only about half of the more than 100 migrant children under 5 today, after a federal judge in San Diego agreed to extend the deadline mandating the reunification of all of the youngest children. Today’s secretive reunification operation will be overseen by the Department of Homeland Security and will involve transporting the children hundreds of miles across the country to undisclosed locations. In total, about 3,000 children are still separated from their parents.