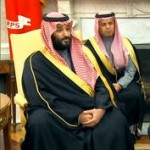 On Tuesday, President Trump met with Saudi Arabia’s Crown Prince Mohammed bin Salman at the White House, where the two leaders finalized a $12.5 billion weapons deal. This comes less than a year after Trump announced a $110 billion arms deal with the Saudis.

Reformer or War Criminal? Saudi Crown Prince Welcomed in U.S. as Trump Touts Weapons Deals
On Tuesday, President Trump met with Saudi Arabia’s Crown Prince Mohammed bin Salman at the White House, where the two leaders finalized a $12.5 billion weapons deal. This comes less than a year after Trump announced a $110 billion arms deal with the Saudis. During the meeting, Trump held up posters of recent Saudi weapon purchases from the United States and said, “We make the best equipment in the world.” Human rights groups warn the massive arms deal may make the United States complicit in war crimes committed in the Saudi-led bombing campaign in Yemen.

As Yemen Faces World’s Worst Humanitarian Crisis, Senate Refuses to End U.S. Support for Saudi War
On Tuesday, the U.S. Senate rejected a bipartisan resolution to end U.S. military involvement in the Saudi-led war in Yemen within 30 days, unless Congress formally authorizes the military action. The vote was 44 to 55, with 10 Democrats joining the Republican majority to block the legislation and Arizona Senator John McCain not casting a vote. The U.S.-backed, Saudi-led airstrikes and naval blockade have devastated Yemen’s health, water and sanitation systems, sparking a massive cholera outbreak and pushing millions of Yemenis to the brink of starvation. More than 15,000 people have died since the Saudi invasion in 2015.

Are Israel & Saudi Arabia Pressuring U.S. Toward War with Iran?
Journalist Mehdi Hasan and Medea Benjamin, co-founder of CodePink, discuss how the United States is siding with Saudi Arabia in its feud with Iran and what it means for the Middle East. Could it mean war against Iran? On Monday, Saudi Arabia called the 2015 nuclear deal between Iran and world powers a “flawed agreement.” President Trump has long threatened to pull out of the deal.

15 Years After Invasion of Iraq, Amnesia & Distortion Obscure U.S. Record of War Crimes & Torture
Fifteen years ago this week, the U.S. launched its invasion of Iraq on the false pretense that Iraqi President Saddam Hussein was hiding weapons of mass destruction. The attack came despite worldwide protest and a lack of authorization from the United Nations Security Council. The ongoing war has devastated Iraq and destabilized the region.