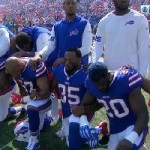 In the biggest display of athletic defiance in years, football teams across the nation protested President Donald Trump after he attacked the NFL, NBA and some of their most popular athletes for daring to draw attention to racism and police violence.

Take the Knee: Athletes Unite in Historic Protest Against Racism & Police Brutality, Defying Trump
In the biggest display of athletic defiance in years, football teams across the nation protested President Donald Trump after he attacked the NFL, NBA and some of their most popular athletes for daring to draw attention to racism and police violence. We look at the unprecedented role of political activism among athletes under the Trump presidency and the politics of playing the national anthem at games. Dr. Harry Edwards is professor emeritus of sociology at the University of California, Berkeley, and the author of several books, including “The Revolt of the Black Athlete,” reissued this year for its 50th anniversary edition. He was the architect of the 1968 Olympic Project for Human Rights and is a longtime staff consultant with the San Francisco 49ers.

Former NFL Player Donté Stallworth: Don’t Let Trump Hijack the Conversation on Racism & Violence
At a campaign rally in Huntsville, Alabama, on Friday evening, Trump lashed out at players who have joined a growing protest movement started by former 49ers quarterback Colin Kaepernick against racial injustice, kneeling during the national anthem ahead of games. Former NFL player Donté Stallworth, who spent 10 years in the league and is now a sports commentator, says, “We can’t allow the president to hijack this conversation and make it all about him.”

Dr. Harry Edwards on the Injustice of Brain Injuries & CTE as NFL Rosters Become Predominantly Black
Amid increasing concern over chronic traumatic encephalopathy, or CTE, a degenerative brain disease linked to repeated blows to the head, a recent study of the brains of 111 deceased NFL players found all but one were found to have CTE.