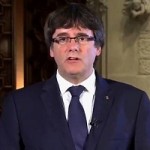 Spain is plunged into a political crisis as the Spanish government moves to impose direct rule over Catalonia. On Saturday, Spanish Prime Minister Mariano Rajoy announced the move, stripping the northeastern region of its autonomy in an effort to crush Catalonia’s independence movement.

Will Catalonia Declare Independence After Spain Moves to Impose Direct Rule, Oust Catalan Leaders?
Spain is plunged into a political crisis as the Spanish government moves to impose direct rule over Catalonia, following the region’s independence referendum. On Saturday, Spanish Prime Minister Mariano Rajoy announced the move, stripping the northeastern region of its autonomy in an effort to crush Catalonia’s independence movement. Following an emergency Cabinet meeting on Saturday, Rajoy said he will invoke Article 155 of the Constitution, which has never been used in Spain’s modern democratic history. Carles Puigdemont, speaker of the Catalan Parliament, has called Spain’s move to seize political control of the region a “de facto coup d’état.” Puigdemont said that Catalonia’s Parliament will meet in the coming days, amid speculation he might unilaterally declare Catalan independence.

How Trump’s Presidency Is Fueling Right-Wing Nationalist & Anti-Immigration Movements Across Europe
In Austria, conservative leader Sebastian Kurz has been tasked with forming a government after he won a slim majority in the snap elections earlier this month. His conservative party, which campaigned on an anti-immigration platform, is now weighing whether to form a coalition with Austria’s far-right populist Freedom Party, which won 26 percent of the vote in the Austrian elections. The Freedom Party was founded by former Nazis six decades ago. This comes as hate crimes in Britain hit a record high and anti-immigrant nationalist movements are surging across Europe.

Trump’s Proposed Tax Overhaul Would Give Billions to Trump & Cabinet While Sparking Global “Tax War”
The Senate has narrowly passed a budget bill that clears the path for a historic tax reform. Trump’s proposed tax overhaul would shower billions of dollars in tax cuts upon the wealthiest Americans—including his own family and members of his administration. An analysis by the Center for American Progress Action Fund shows Trump’s family and Trump’s cabinet members would, combined, reap a $3.5 billion windfall from the proposed repeal of the estate tax alone. Trump’s plan would cap the tax rate on “pass-through income” at 25 percent—a move that would also shower millions in savings upon millionaires and billionaires. Pulitzer Prize-winning journalist David Cay Johnston recently wrote a report titled “Nine Reasons Trump’s Tax Plan Will Hurt You.”