On Friday, Trump canceled a rally in Chicago after thousands of people staged an anti-Trump protest outside. Trump continues to receive criticism for the levels of violence committed by his supporters. 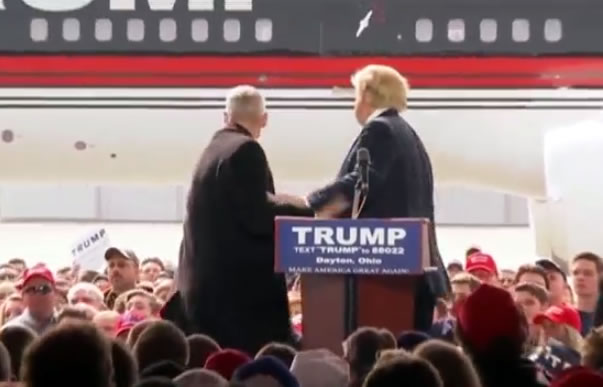 Republican front-runner Donald Trump is facing growing criticism for appearing to condone violence by supporters. Speaking on Meet the Press, Trump told Chuck Todd he has instructed his staff about paying the legal fees for a Trump supporter who punched an African-American protester in the face.

On Friday, Trump canceled a rally at the University of Illinois at Chicago after thousands of people staged an anti-Trump protest outside. At least five people were arrested after multiple scuffles broke out both inside and outside the rally venue. One Trump supporter was photographed giving a Nazi salute.

In the wake of the protests, Trump blamed supporters of Vermont Senator Bernie Sanders for the unrest. On Sunday, Trump wrote a message on Twitter saying, “Be careful Bernie, or my supporters will go to yours!” We speak to a student and professor at the University of Illinois at Chicago involved in organizing the protest.