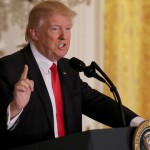 Why Did ICE Arrest & Imprison a 23-Year-Old DREAMer and DACA Recipient Living Legally in the U.S.?
President Trump said he would “show great heart” when considering whether to deport recipients of DACA, or Deferred Action for Childhood Arrivals. So why is Daniel Ramirez Medina sitting in jail? We look at the case of a 23-year-old father who was detained by ICE one week ago in Des Moines, Washington, even though he has permission to live and work in the United States under DACA. His supporters have maintained a vigil at the Northwest Detention Center in Tacoma, Washington, where he is being held. It’s a private detention center owned by the for-profit prison company GEO Group.

Undocumented Mother in Sanctuary in Denver Church: I’ve Paid Taxes for 20 Years, Why Hasn’t Trump?
Inside the First Unitarian church in Denver, the team interviews Jeanette Vizguerra, an immigrant mother of four children who has taken refuge there out of fear she would be arrested and deported to Mexico if she went to her scheduled check-in with Immigration and Customs Enforcement. Vizguerra came to the U.S. from Mexico in 1997 and is one of the founders of the Metro Denver Sanctuary Coalition. She previously won five postponements of deportation, but said she doubts she could win a similar reprieve under the Trump administration.

Denver Church Gives Sanctuary to Immigrant Mother Facing Deportation: “We Are Not Breaking Any Laws”
The team goes to Denver to speak with Reverend Mike Morran, senior minister at First Unitarian Society of Denver, where an immigrant mother of four has has taken sanctuary to avoid deportation. “We believe that we are not breaking any laws by having her in the church,” Rev. Morran says. He describes how the church came to host Jeanette Vizguerra, and explains their protocol for how to respond to immigration agents if they come to arrest her.

Does New Labor Secretary Nominee Alex Acosta Have the Perfect Résumé to Sabotage a Federal Agency?
Trump has named longtime Republican lawyer Alex Acosta to be his new nominee to head the Labor Department after his first pick, fast-food CEO Andrew Puzder, withdrew Wednesday. Alan Pyke, an editor with ThinkProgress, argues Trump’s backup choice “has skeletons in his closet, too.”

Acosta has drawn scrutiny for his time as a division leader at the Department of Justice’s Civil Rights Division under President George W. Bush, where he oversaw a senior official who hired conservative lawyers who were actively opposed to the division’s mission, including the prosecution of voting rights violations and police abuse. In 2004, he played a key role in Bush’s final push to win the state of Ohio by backing Republican election officials accused of seeking to suppress voter turnout among blacks and Latinos.