The astrology of Valentine’s Day 2017 as read by Len Wallick encourages you to release exclusive attachment to pervasive commercialization of the event, so as to embrace your own humanity — and that of others. It would follow that you should also fully embrace your own unique experience.

Strictly speaking, the astrological term ‘transits’ has greater dimension than just a current location of celestial objects on the zodiac. More specifically, transits are current locations relative to the distribution of the Sun, Moon and planets at the time of your birth. Today, however, is no day to be strict or coldly technical. It is an occasion to be tender.

Valentine’s Day may not have started out as a crass commercialization of our most sensitive set of emotions. Nonetheless, it sure has turned out that way. For those who lack money to purchase advertised trappings (or who simply lack for love), this is an especially vulnerable time.

Obviously, those who are currently in thrall of affection and in possession of discretionary funds should be respected as well. The practice of compassion has enough dimension itself to include the fortunate.

Hence, today’s astrological offering is offered without rigorous adherence — yet with consideration for your humanity. Hopefully, the words here will be of use for you today (and for the next several days) regardless of your personal astrology, what you are feeling or how much you have.

The astrological deep background of this Valentine’s Day has long been reiterated by the astrologers here at Planet Waves. The Aries conjunction of galvanizing Uranus with the emerging profundity of Eris has been continuously proving its pertinence since last year. Change is in the air.

We are not speaking of just any kind of change, either. Long historical trajectories are involved. To live and love during such a time thus entails both trial and privilege on a relatively grand scale. Then, there is Venus and Mars.

It’s not unusual for the emotional and relationship issues brought to the fore on Valentine’s Day to correlate with Venus and Mars. Because both planets are visible to the unaided eye, they have always been part of human awareness. Hence, the mythology behind the names has reliable meaning in your life.

For the ancient Greeks and Romans (at least), the mythical Venus and Mars were synonymous with the two planets so named. Taken together, they represented the polarization that nearly always goes with the territory of compelling attraction.

To have Venus and Mars both in Aries (along with Uranus and Eris) at this time implies that the qualities that correspond with even the most personal relationship are unavoidably entangled with bigger issues. Keep that in mind even if you are not living through the epic drama depicted in the motion picture Casablanca or the novel A Tale of Two Cities.

It would also be useful to keep one other thing in mind. Even though both Venus and Mars are currently sharing the same sign, they are not going to come together in the same degree of Aries. This year’s conjunction of Venus and Mars will be deferred until Oct. 5, when they finally achieve their roughly biennial merger — this time, in Virgo.

In addition to all the pertinent action in fiery Aries, we are currently in the temporal zone between a Full Moon (and lunar eclipse) late last week and a New Moon (which will also be a solar eclipse) on Feb. 26. Currently, the Moon is in airy Libra. The Sun, for its part, is in the latter degrees of airy Aquarius. If you consider the holistic combination of what the Sun and Moon are doing for Valentine’s Day (and at least the day after as well), several clear implications shine through.

First, it would be useful if you are equally conscious of both detachment and involvement at this time. Simply being aware that those two states of being (and the spectrum in between) are available to you will be empowering.

Next, take a little time to think about patterns and cycles. You have seen enough of your own life to very possibly locate your current position in personal patterns and cycles. If you can’t figure out ‘where’ you are at right now, there is bound to be at least some useful information in that, too.

Evaluating either relationships or the world as a whole in terms of patterns and cycles must necessarily involve some speculation. Nonetheless, so long as you refrain from either drawing final conclusions or judging others, some significant insights could well be more available now than at other times.

Finally, allow yourself simply to have your own Valentine’s Day experiences. There will be time for analyzing the details later. For now, take it all in so as to remember as clearly as possible. Even if what you are going through now is a trial, try to retain as much as you can. If there is anything to astrology, today’s memories will, at the very least, come in handy later. 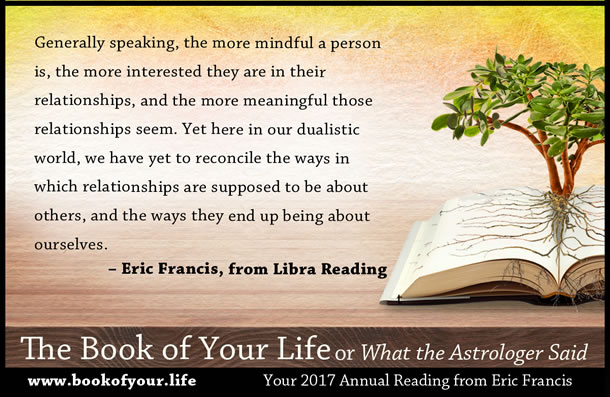 One thought on “Your Valentine”