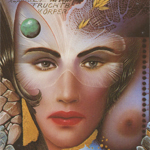 Sarah Taylor is Planet Waves’ resident tarot writer and teacher. In this week’s three-card reading, the Prince of Cups, the Queen of Disks (Pentacles) and the Three of Cups come together: the marriage of your desire, your groundedness, and a third element in alchemical transformation, conception and community.

What’s on the mind of the Prince of Cups as he closes his eyes and faces into the cosmos of possibility? Not that it’s hard to take a guess — but perhaps the other cards speak to something more complex than first appearances. 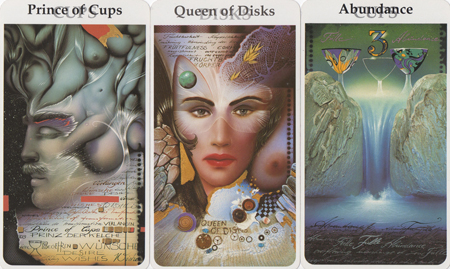 Prince of Cups, Queen of Disks, Three of Cups from the Röhrig Tarot deck, created by Carl-W. Röhrig. Click on the image for a larger version.

How does he make that leap from contender to ruler? How does he own who he is, assume full responsibility for his role as an agent of transformation, and step into being someone who doesn’t just dream about desire, but whose life is offered in service to desire and to living that out as wholly, autonomously, and purposefully as possible?

The key lies in the central card, the Queen of Disks. Earth to the Prince’s water, feminine to his masculine, fully-fledged (the butterfly wings are formed, whole), the Queen of Disks also cuts a sensual figure, but in this case she is bound to nature while he is suspended in space. She is the grounding, feminine principle that, through her presence — looking straight at us as she does — sees what he cannot see, knows what he does not yet know.

One of the first things I noticed was that the Prince is turning away from the Queen. What can this mean? It signifies that they are not so much in direct (eye-to-eye) relationship as they are in psychic relationship. The breast that touches the Queen’s left cheek is also present next to the Prince. There is a bond here that is suggestive of, even if it isn’t only limited to, an inner relationship — a coniunctio, or marriage between two aspects of oneself.

But is it the Prince who is growing into the world of the Queen? Or is the Queen now realising her inner Prince? And does it really matter? I think not. Because what is important is not who comes first, but what happens when they come together (in a manner of speaking).

Abundance. The Three of Cups:

“Overflowing interchange of love,” “exceptional valuable feelings, which can be –”

Which can be what? The writing flows beyond the edge of the card. Don’t you love a good mystery?

What is clear from the final card is that there is a third element that that forms part of this marriage based on an “overflowing interchange of love”: a cup that stands at the head of the waterfall, unpatterned, a little different, and yet part of a cohesive whole. What does that mean? Perhaps this is part of the mystery: that third presence, or ingredient, that is necessary for the complete fruition of what this reading holds.

The Three of Cups is very much a feminine card, the cascade over two rocky outcrops reminiscent of a woman’s thighs parting to reveal her watery depths. Two come together and a third is formed. This is alchemy; this is conception; it is community. Or, it is the potential for alchemy and conception (whether creative, physical or both) and community. Right now, what forms from this vessel is that mystery alluded to in the phrase that currently sits unfinished.

Bringing these two aspects together, what are you feeling? And where are you being guided — by your heart, by your desire, by your groundedness which connects you to life? What is emerging from their union? What can be brought forth? I look at this reading, and I want to start fanning myself, quite frankly. Not so much because it’s hot-hot-hot, but because it is full, present, and charged with longing and knowing.

Why not slip into those waters, grounded in the certainty that you are held — and that it is you doing the holding?

See — or better, feel — where they take you.

Astrology/Elemental correspondences: Prince of Cups (the airy aspect of water), Queen of Disks (the watery aspect of earth), Three of Cups (Mercury in Cancer)