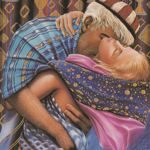 This week, Sarah Taylor explores a three-card layout that asks you to step out of your mind, and into your body. There are three aspects of who you are that are inviting you into a deeper encounter with them — one that you feel rather than think, and one that asks you to consider how you are in relation to others.

Healer. Lover. Ruler. The reading this week brings you into a close encounter with three aspects of the masculine — more specifically, your masculine — or something or someone who embodies a masculine nature reflected back to you. (It is worth remembering that the masculine and feminine are inner aspects or qualities we all share, no matter what gender we are.) 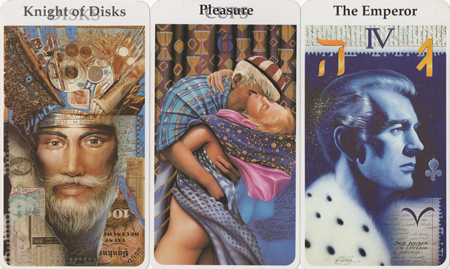 Knight of Disks, Six of Cups, The Emperor from The Röhrig Tarot deck, created by Carl-W. Röhrig. Click on the image for a larger version.

It’s really quite an extraordinary reading, and I can’t quite put my finger on it — yet. Perhaps it is extraordinary because we have, in each card, a separate sub-section of the tarot deck: on the left, there is a Court Card; at centre, a card from the Minor Arcana; and on the right, one from the Major Arcana.

Or perhaps that extraordinariness has something to do with the aspects of the male figures themselves: the Knight (the King in the Rider-Waite Smith deck) — Healer — is looking directly at us, while The Emperor as Ruler looks off the right of the card beyond the reading, his vantage point affording him something in the near future that we are not yet able to see. Finally, the Lover in the Six of Cups seems consumed by the sensation of running his lips over the neck of the woman in his arms — eyes closed, upper part of his body visible, arms drawing her into him.

Sober; sensual; regal. All ornate, however. There is not one card here that speaks of ‘austerity’. It is an immersive, sensory layout that sees the coins in the Knight’s headdress moving into the smaller moons on the woman’s scarf, finally finding themselves as the cosmic dust that gathers in the wake of The Emperor.

Yes. This is immersive. You feel this reading rather than think it.

And if you were to feel the three cards — how they talk to each other, how they are interlinked, what they weave — what would they offer you? What structures and progressions of sensory immersion are played out through your body when you move your eyes from one to the next, to the next, and back again?

Who are you when you look at these cards? Who do you become as a felt sense of each of them? What are they communicating to you in terms of how they move you, and how you move with them? What guises and personae, what actions and drives, do you feel activate in you?

As each of these, you engage with yourself and the world differently. Yet while they appear together in one reading, and there is a synergy to them that feels unmistakable, each of them faces in a different direction.

And, as I look closer, more to this story emerges.

The two outer cards are authority figures in the traditional sense: a King and an Emperor. Both reach their positions of authority either by birth, or by an assertion of that authority, whether declared through legislation or an act of war. They are not democratically elected; they assume power. A King is generally considered as ranking lower than an Emperor, though both rule their realms. The card at the centre also speaks of the masculine figure as dominant — except here it is in the context of the intimately interpersonal. Here there is the presence of another who may be the one who is being held and who is positioned as physically submissive, but who feels a wholly equal and essential participant in the tryst.

I wonder if they are not just engaging with the world differently but, more specifically, with their counterparts, whether present or implied? And so I wonder if there are different ways that you engage with another or others depending on the hat you are wearing, the role you are playing, the energy that you are bringing to bear on your life.

Maybe you have more options available to you in how you bring yourself to others than you may at first have believed? Maybe it is entirely natural to feel differently and to act differently depending on the role of authority that you are assuming in your life?

All three coming together in one place: you. Remember that this is about your own sensory experience of holding these separate yet complementary qualities. Don’t think about it too much. Rather, experience yourself as each one and see where they take you, what they show you, and how you unfold to yourself.

Astrology/Elemental correspondences: Knight of Disks (the fiery aspect of earth), Six of Cups (Sun in Scorpio), The Emperor (Aries)