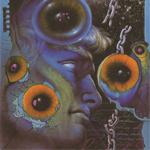 In this week’s reading, Sarah Taylor explores the re-emergence of The Fool — one of the cards that welcomed us into the New Year — and how your stepping up and out in your own life has started to make itself known. Masks are falling; chains are being broken; liberation awaits.

The Fool has shown his face twice before this year — in the reading on Jan. 1, and again on Feb. 1. Here The Fool is for the third time, forming the foundation to this week’s reading. Third time’s a charm; the card’s magic is being woven. 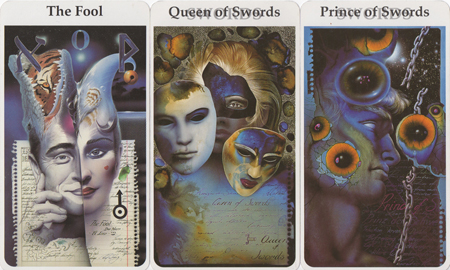 The Fool, Queen of Swords, Prince of Swords from The Röhrig Tarot deck, created by Carl-W. Röhrig. Click on the image for a larger version.

On Jan. 1, the card next to The Fool was the Ace of Swords. Today, it is the Queen of Swords, with the Prince of Swords to her right. It feels to me like the potential of the Ace — which we can choose to draw from, or not — has been made manifest, and is expressing itself actively through an aspect of the personality. This will be active in you, and it may also be mirrored to you from someone else.

What I see in this reading first and foremost, in motion specifically in The Fool and the Queen of Swords, are masks and their removal. There is a sense of your no longer needing what you have hidden behind; there is a falling away of something that you no longer need to wear. Perhaps you have noticed where you have felt you have hidden, and where there is the ability to expose and reveal your true face, layer by layer, in an act of self-declaration.

The removal of masks is your act of self-declaration and a path to freedom.

This freedom has a specific form, denoted by the court cards’ suit: Swords. Swords are associated with the mind, and therefore also thoughts, intellect, beliefs. Creatures of habit that we are, we have a propensity to form thought patterns: modes of seeing ‘what is’ through filters gathered over the course of our lifetimes, particularly in our childhoods, and shaped by people we considered, and sometimes still consider, authority figures.

Here, there is the opportunity, through the foundation of no-mind of The Fool, to identify and, if you so choose, to divest yourself of an outer enamel of beliefs that have not only shaped how you see the world — but also how the world has seen you.

Take a look at the card at centre, the Queen of Swords. Two empty-eyed, stylised masks seem to be moving away from the queen herself, with only a smaller one remaining — one that allows us to look at the lower half of her face with full mouth, and which exposes more of her eye. Part of her face is still hidden, but, now, I see her. She is beautiful, fragile yet strong. Yes, a mask remains, but the blue of it feels as if it has depth to it; it provides a striking contrast against her blonde hair. Now that I look more closely, it’s as if a tear is gathering on the rim of the lower lid of her eye. She sees more as she, in turn, allows us to see her.

The interesting thing is this: she still remains a mystery. Letting pretence fall does not make her simple. If anything, she has rendered herself more complex. As I am let into her humanness, I am also aware of a grace and dignity to her that were, also, hidden from me.

How we hide the gold along with the shadow. How you have hidden your light for fear of the darkness.

And so to the final card, on the right, in the form of the Prince of Swords. When I look at him, I see ‘birth': he has issued from the Queen — a nascent, but strong, masculine force that feels younger, and perhaps less experienced, but whose resolve to forge his own way beats like a blue heart out of the card. His face is unmasked, though we can see only one side of it. His eye glows a blue-white. This is inner-sight, or intuition. He does not need ordinary eyes to see. His sight comes from another source: a corona edges around the blue that bubbles up from his forehead, distant in space-time. He is bonded with something that lies outside, and yet is connected with him, and he with it.

At the same time, it appears as if his focus has freed him from a different kind of bond: a chain that runs down the right-hand side of the card and past his shoulder is now broken in two places — one of them a clean break. Aided by his connection to the light, he has liberated himself.

From what? From karma. From an intergenerational yoking that is forged through blood.

Because while the Queen’s masks fall, so the Prince moves away from the Queen and into his own, as yet unknown, personal destiny. The ties that bound no longer do so in one key respect. A belief or an entrenched pattern of thought whose links you can follow into the way-back-when has lost the ability to keep you in your place. There is freedom from an outmoded dynamic that has held you in check and incognito for long enough; both the mature (inner) feminine and the younger (inner) masculine can, in some way, extricate themselves from a stultifying situation and assert their independence and find new ways to be and to move.

Never underestimate a Fool, no matter what his appearance seems to be. No-mind is not ‘mindless’. Taking that step into the unknown has precipitated an emergence — a birth — from within. You are looking through a doorway to a freedom that started out as a thought, its genesis resting in the power to imagine something different.