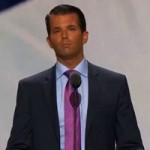 The White House is in disarray following revelations that Donald Trump Jr. supported an effort by the Russian authorities to share information incriminating Hillary Clinton in an attempt to help Trump win the election.

Trump White House in Crisis as Emails Confirm Campaign Embraced Russian Effort to Defeat Clinton
The White House is in disarray following revelations that Donald Trump Jr. supported an effort by the Russian authorities to share information incriminating Hillary Clinton in an attempt to help Trump win the election. The latest development in the ongoing saga of whether the Trump campaign colluded with Russian authorities came from a series of emails that Trump Jr. personally released on Tuesday. The emails discussed a meeting he—as well as Jared Kushner and Paul Manafort—had in June 2016 at Trump Tower with a person described to him as a “Russian government attorney.”

Senate Begins Confirmation Hearings for Trump FBI Pick Tied to Torture, Gitmo
On Wednesday, Donald Trump announced that he would nominate Christopher Wray, the former assistant attorney general in the Justice Department during the George W. Bush administration, to be the next FBI director. He is also the former personal attorney for New Jersey Gov. Chris Christie, a Trump ally. Wray’s background is raising questions about his ability to remain impartial as the head of the nation’s premier law enforcement agency.

Mexico Spied on Human Rights Investigators & Families of Missing Students Instead of the Kidnappers
The Mexican government reportedly used an Israeli-made spy software called Pegasus to surveil a team of international investigators dispatched to Mexico to investigate the high-profile disappearance of 43 students in 2014.

122 Countries Overcome U.S. Opposition and Pass Landmark U.N. Global Treaty to Ban Nuclear Weapons
In a major development that has received little attention, 122 U.N. member states have approved a global treaty to ban the possession and use of nuclear weapons, despite the United States leading the opposition to the treaty.