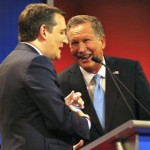 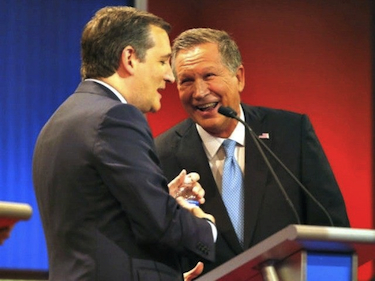 Ted Cruz (left) and John Kasich: not exactly bosom buddies, and yet… Photo by Paul Sancya

The New York Times reported earlier today that Mr. Cruz’s campaign manager, Jeff Roe, said in a statement Sunday night that the campaign would “focus its time and resources in Indiana and in turn clear the path for Governor Kasich to compete in Oregon and New Mexico.”

Shortly after that, Kasich’s chief strategist, John Weaver, said they would shift resources to states in the West and “give the Cruz campaign a clear path in Indiana.”

The campaigns’ allies and affiliated Super PACs are expected to follow suit.

A month ago Weaver had made the suggestion to Cruz’s team, who rejected it in favor of keeping the spotlight in high-profile contests; since then, Cruz’s situation — and that of the GOP elite — has become more desperate, with the goal shifting from winning the nomination with a clear majority during the primaries to preventing Trump from doing so.

Although polls show Cruz trailing Trump in Indiana, Kasich threatens to win delegates in the Indianapolis area. If those votes go to Cruz as a result of this new strategy, he could close the gap on Trump. Indiana awards delegates based on congressional district results and the overall winner. According to the Times, “five of the state’s nine districts include or immediately border the county that is home to Indianapolis,” making that region’s voting integral to the final delegate count for the state.

Also pushing the Cruz-Kasich alliance is the fact that Oregon opens its early voting period this week — although at this time, the Cruz camp has given no specific instructions to Oregon voters to vote for Kasich instead, as Rubio did in Ohio.

Why would the Cruz campaign offer to punt in Oregon and New Mexico? Because if you combine the delegates for those two states (52), it comes close to the total for Indiana (57). Oregon and New Mexico are also “proportional states,” meaning that the winner will not take all. And since Cruz can no longer clinch the nomination in the primaries, it’s no real loss to sacrifice a few delegates to Kasich in an effort to keep them out of Trump’s tally.

Ironically — as both Trump and several comments on the New York Times website pointed out — this move looks a lot like the “collusion” in a “rigged system” Trump has been calling out during his campaign.

Commenter Peter K of New Jersey wrote, “Excellent! Trump falls just short of 1,237 and the convention becomes an expensive, damaging war for all involved, especially the GOP itself. Trump eventually gets the nomination anyway, and immediately after the election, Merrick Garland withdraws from consideration so that President Clinton can nominate a young, reliable liberal to SCOTUS, who is then quickly confirmed by the Democratic majority in the senate, of course a result of the down-ticket damage caused by Trump. Perfect.”

Bud, from McKinney, Texas, underscores the idea of “down-ticket damage” that could result: “I’m an independent voter and a conservative. If the Repubs do not nominate Trump, I will vote out every sitting Repub from Senator to local city council. We’re told from elementary school we live in a democracy and our votes count. Then we’re exposed to all this nonsense about super delegates with the Dems, silly rules with the Repubs, etc. Cruz and Kasich are behaving like kindergarten children.”

Jack, from New York, New York, adds, “Cruz tried to play as an outsider but now that his campaign is in trouble, he is resorting to the ultimate insider’s game of collusion to protect the status quo. [Do] Kasich and Cruz not realize that we the people are not stupid? Trump’s attractiveness is not himself or his persona — au contraire — but that he offers to expose and eliminate political corruption, the driving force that keeps professional politicians in business. The electorate understands this even if Cruz and Kasich do not. Even Bernie Sanders and his supporters on the other side understand this.”

At the very least, what everyone seems to understand is what a bizarre primary season this is. And, as Fe Bongolan points out in her column today, the insanity is bringing to light much that we can change, if we have the will and integrity to stick to our ethics and demand that our public servants do the same.