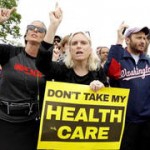 After weeks of secret deliberations, Republican senators released a healthcare proposal that would remove millions of low-income and disabled people from Medicaid, prompting protests on Capitol Hill that are expected to continue throughout the country.

Republican Healthcare Bill Gives Tax Cuts to the Rich by Gutting Safety Net for Poor & Middle Class
After weeks of secret deliberations, Republican senators released a healthcare proposal that would remove millions of low-income and disabled people from Medicaid, prompting protests on Capitol Hill that are expected to continue throughout the country. The bill would also cut subsidies to purchase health insurance, allow states to effectively eliminate protections for people with pre-existing conditions, and defund Planned Parenthood for a year. It was negotiated behind closed doors between 13 Republican male senators. Guests are Harvard professor John McDonough, a chief architect of Romneycare who also worked on the development and passage of the Affordable Care Act, and Dr. Steffie Woolhandler, a key advocate for Medicare for All.

By Defunding Planned Parenthood, Republicans Would Reduce Services That Make Abortion Unnecessary
The healthcare bill proposed by Senate Republicans would reduce key benefits for millions of Americans and defund Planned Parenthood for a year, making breast cancer screenings and basic reproductive services more difficult for women to secure. “The Affordable Care Act expanded access to the preventive services of contraception and family planning,” notes Dr. Willie Parker, a physician, abortion provider and the board chair of Physicians for Reproductive Health. “It strikes me as odd that the people who are ideologically driven to reduce abortion in this country are going to reduce the very services that make abortion unnecessary. So, hundreds of thousands of women got their birth control through Medicaid coverage because it was a preventive service, and as a result of that, we’ve seen the lowest number of abortions in this country since it became legal.”

Support Grows for Single-Payer Medicare-for-All Plan Instead of Massive Cuts to Healthcare
Health experts say, given the shortcomings of both the Affordable Care Act and Republican proposals, now is the time to move forward with a simple Medicare-for-all system, known as single payer. In 2015, even Donald Trump appeared to come out in favor of a form of single-payer health insurance. About 20,000 U.S. physicians now support single-payer healthcare, and National Nurses United, the biggest nursing union in the country, is also pushing for the program that would guarantee universal coverage.

Is South Sudan Government Engaged in Ethnic Cleansing, Triggering Africa’s Biggest Refugee Crisis?
An ethnic cleansing campaign carried out by the South Sudanese government has triggered one of the biggest refugee crises in Africa. The United Nations has accused the government’s Sudan People’s Liberation Army, known as the SPLA, of committing atrocities including mass rape and torture, as well as burning down entire villages. A U.N. report published in May says the abuses may amount to war crimes.