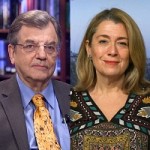 “Trade wars are good, and easy to win.” That’s the message President Trump tweeted on Friday, sending shockwaves across the globe and sparking fear of impending economic volatility. On Thursday, world stock markets tumbled after Trump announced he plans to impose new tariffs.

Lori Wallach and Michael Hudson Debate Trump’s Plan to Impose Steel & Aluminum Tariffs
“Trade wars are good, and easy to win.” That’s the message President Trump tweeted on Friday, sending shockwaves across the globe and sparking fear of impending economic volatility. On Thursday, world stock markets tumbled after Trump announced he plans to impose new tariffs on imports of foreign steel and aluminum. The new tariffs—25 percent on steel and 10 percent on aluminum—will benefit U.S. producers of the metals, while raising prices for companies that manufacture everything from cars to airplanes to high-rise apartments. Prominent Republicans and business leaders have denounced Trump’s plan, saying the tariffs will hurt the manufacturing industry and U.S. competitiveness. Trump’s announcement has also prompted concerns that other countries will impose retaliatory tariffs while challenging U.S. protectionism at the World Trade Organization.

Sen. Chris Murphy Calls for Reinstating Assault Weapons Ban & Breaking NRA’s “Vise Grip” on GOP
The Florida Senate has voted to support a number of a new gun control measures following the massacre at Marjory Stoneman Douglas High School in Parkland, Florida, which left 17 people dead. Meanwhile, in Washington, Republican lawmakers said last week they’re moving on from the debate over gun control, after failing to pass a single bill on firearms in the wake of last month’s massacre in Florida. One of the most vocal advocates for gun control in Washington is Democratic Senator Chris Murphy of Connecticut. Shortly after the Florida shooting, Murphy took to the floor of the Senate to call for action. “Let me just note once again for my colleagues that this happens nowhere else other than the United States of America, this epidemic of mass slaughter, this scourge of school shooting after school shooting,” Murphy said. “It only happens here, not because of coincidence, not because of bad luck, but as a consequence of our inaction.”

Sen. Chris Murphy: The U.S. Is Exporting Violence & Killing Civilians in Illegal War in Yemen
On Capitol Hill, three U.S. senators have introduced a bill that would force Congress to vote for the first time on whether to continue U.S. support for the Saudi-led coalition’s war in Yemen. The measure was introduced by Republican Mike Lee, Democrat Chris Murphy and Vermont independent Bernie Sanders, who noted that the Constitution gives Congress—and not the president—the power to declare war. For more, we speak with Senator Chris Murphy of Connecticut.