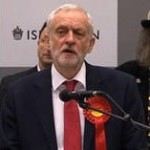 British Prime Minister Theresa May suffered a major setback Thursday in an election that saw her Conservative Party lose its majority in Parliament less than two weeks before the country is scheduled to begin talks over exiting from the European Union.

Labour’s Jeremy Corbyn Rides Leftist Tide in U.K. Election in Rebuke of Austerity & Conservatives
British Prime Minister Theresa May suffered a major setback Thursday in an election that saw her Conservative Party lose its majority in Parliament less than two weeks before the country is scheduled to begin talks over exiting from the European Union. May called the snap election three years early, expecting to win a large mandate to negotiate with European leaders over the terms of the so-called Brexit. Instead, Conservatives were left without a clear majority and a hung Parliament. Labour Party leader Jeremy Corbyn, who ran on a platform of “For the many, not the few,” said Thursday’s election results show voters are “turning their backs on austerity.” Guests are Paul Mason, columnist for The Guardian, and Mehdi Hasan, award-winning British journalist and broadcaster at Al Jazeera English. He is host of the Al Jazeera interview program “UpFront” and a columnist for The Intercept.

Is the President a “Serial Fabricator”? Fired FBI Director Comey Testifies About Trump’s “Lies”
Fired FBI Director James Comey testified Thursday that President Trump tried to derail an investigation into National Security Adviser Michael Flynn’s links to Russia, and accused Trump of lying about why he was fired. Comey testified that he documented every meeting he had with Trump because he thought the president might lie about what had taken place, and said he leaked the meeting details to the media in order to spur the appointment of a special counsel. “From a political point of view, we know that one of the biggest flaws in Donald Trump’s presidency, his candidacy, his ability to be president, is that he’s a serial fabricator,” says Mehdi Hasan. “Now you have the former top law enforcement officer of this country going in front of the Senate, under oath, saying those are lies, plain and simple.”

Will Obstruction of Justice in Comey Firing See Trump Ousted Or Is Impeachment a “Liberal Fantasy”?
The issue of whether or not Donald Trump taped conversations with James Comey was raised several times during Comey’s dramatic testimony Thursday before the Senate Intelligence Committee, prompting the question of whether a smoking gun exists that could lead to Trump’s impeachment for obstruction of justice. “It’s a liberal fantasy to talk about impeaching Trump,” says Mehdi Hasan. “I don’t think this House of Representatives, this Republican Congress, has any interest in impeaching Donald Trump. Even if you were to produce a video of Trump talking in Russian to Putin asking for his marching orders, I suspect Paul Ryan and co. would not decide to impeach him.”