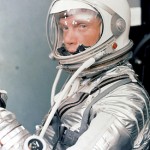 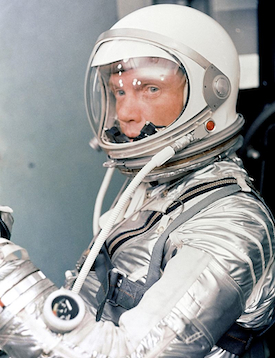 John Glenn in his Mercury pressure suit in preparation for launch of the Mercury Atlas 6 (MA-6) rocket. Photo: NASA

Glenn is perhaps most famous for being the first American to orbit the Earth, aboard the Friendship 7 spacecraft in 1962. Later, at age 77 in 1998, he became the oldest person in space aboard the Space Shuttle Discovery.

A U.S. Marine combat pilot, test pilot, engineer, astronaut and four-term U.S. Senator, Glenn fought in both WW II and the Korean War. It was in that later conflict that he earned the nickname “magnet ass” from his apparent ability to attract enemy flak. Glenn also completed the first supersonic transcontinental flight in 1957.

Glenn was born July 18, 1921, at 4:00 pm in Cambridge, Ohio — putting his Sun in late Cancer. (Scroll down to see his chart.) Almost a Full Moon baby, his Moon is in mid-Capricorn; his ascendant is early in exploratory Sagittarius. Of note, Glenn also has hypothetical point Transpluto, asteroid Pallas, Mars, Mercury and Pluto all in Cancer.

One might not expect someone with a strong Cancer signature in their chart to be quite such a high-stakes risk taker. But as with real estate, one key to interpreting planetary placements is location, location, location:

All of those Cancer planets and points are in the 8th house of death, sex and transformation.

As Eric quipped in an email last night, “No wonder he was not afraid to sit on top of that untested Atlas rocket. He’s practically a shaman. Alive? Dead? Same difference.”

The Mercury astronauts were the subjects of Tom Wolfe’s famous novel The Right Stuff (and the popular movie of the same name), which shows the men to be the rather wild thrill-seekers that they were — despite NASA’s attempts in the 1950s and ‘60s to present them all as perfectly clean-cut, All-American boys.

In conversation, Eric mentioned, “Funny how Tom Wolfe portrays Glenn as a pious prude.” Yet, not only did he not die due to reckless behavior (cause of death has not been disclosed, but his health was declining, as one might expect at 95), he also has never been known for personal reckless behavior. His one “scandal” involved taking an ill-advised donation from Charles Keating while a Democratic Senator. Not only was he exonerated for that, he was still able to win reelection afterwards.

No doubt Glenn’s Cancerian influence and North Node in Libra contributed to his long and reportedly solid marriage to his high school sweetheart, Anna Margaret Castor, who survives as his widow. And while a Capricorn Moon can hide a deeply sexual side to a person, it might also indicate a great ability to compartmentalize. Glenn might not have been out getting into trouble the way his fellow Mercury Seven astronauts were, but as Eric noted further, “He worked the edge his way.”

As indicated by Jupiter and Saturn straggling his Virgo Midheaven, the ‘right stuff’ in John Glenn’s case may have been a precise, detail-oriented combination of expansion and discipline. If you’re going to burn hard and not burn up, apparently you need to know exactly where those limits are so you can dance along them into old age. 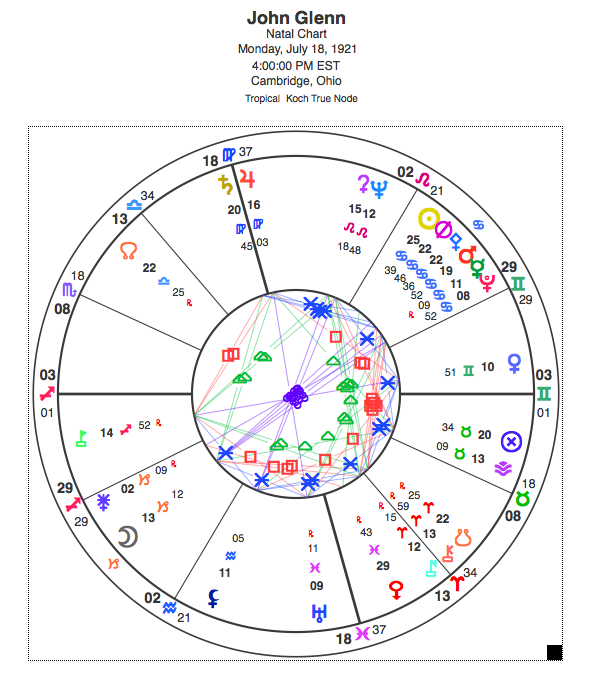 17 thoughts on “John Glenn, first American to orbit the Earth”