This is the ‘home stretch’ of the current lunar cycle, and planets gathered in Scorpio are urging you to take the process deep. With a trine today between Venus in Scorpio and Nessus in Pisces, you might find particular support in addressing or resolving some matter of patterning in a relationship.

“Everybody has a secret world inside of them. All of the people of the world, I mean everybody. No matter how dull and boring they are on the outside, inside them they’ve all got unimaginable, magnificent, wonderful, stupid, amazing worlds. Not just one world. Hundreds of them. Thousands maybe.”
— Neil Gaiman

In Search of (and Creating) Positive Momentum

I wrote today’s column on Wednesday aware of a curious mix of emotions, and maybe you can relate: buoyed by some of this week’s Election Day results; numbed and exhausted by news of yet another preventable mass shooting here in the U.S. But let’s consider some of Tuesday’s good news for a moment, since it represents a direct response to everything that has unfolded in the wake of You-Know-Who’s election to the Presidency one year ago: 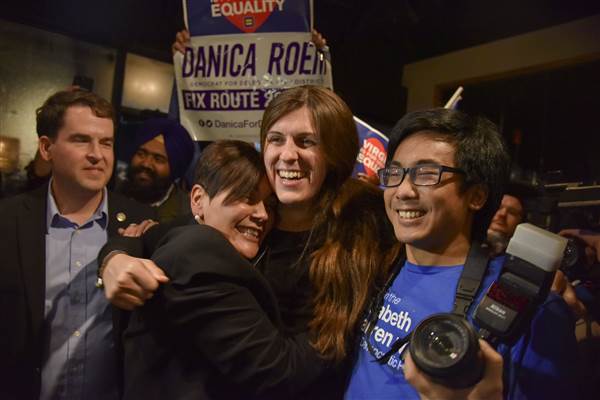 Danica Roem, center, is greeted by supporters as she prepares to give her victory speech on Tuesday. Roem is the first openly transgender state legislator to be seated in U.S. history. Although she discussed her gender identity, her core platform issues included jobs, schools and traffic congestion. Photo by Jahi Chikwendiu / The Washington Post.

Democratic candidates for governor in both New Jersey and Virginia beat out their Republican rivals (remember Chris Christie?), and Dems also won control of the Virginia General Assembly, in a direct backlash to the Trump Effect.

And in Philadelphia, civil rights lawyer Larry Krasner — a longtime opponent of capital punishment who opposes police stop-and-frisk policies, and who has represented protesters with Black Lives Matter, ACT UP, Occupy Philadelphia and other progressive groups — has been elected District Attorney of the City of Brotherly Love.

If Your Birthday is Nov. 10
(The Day of Metamorphosis) | Scorpio Birthday Reading | All Other Signs
Take the controls of your life and do whatever you can to guide yourself in the right direction. This will involve slowing down and making every decision consciously. Where you see no options, or ones you don’t like, it’s essential that you look carefully for other possible choices. This will not happen automatically, though powerful forces are guiding you.

Written in the Planets
With today’s last quarter Moon, see if you can turn the corner on some project that peaked a week ago. This is the ‘home stretch’ of the current lunar cycle, and planets gathered in Scorpio are urging you to take the process deep. With a trine today between Venus in Scorpio and Nessus in Pisces, you might find particular support in addressing or resolving some matter of patterning in a relationship (especially a sexual relationship). Notice what feels like it’s old and could stand to be cut from your life to make way for better, healthier forms of relating.