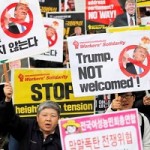 Donald Trump continued his tour of Asia, landing in Vietnam today for the Asia-Pacific Economic Cooperation summit. Trump said on Thursday that he wants Russia’s help in getting North Korea to give up its nuclear weapons. In Korea, he attempted to visit the Demilitarized Zone, but was turned back due to bad weather.

On Asia Trip, Trump Met by Protests Calling on U.S. to Open Diplomatic Relations with North Korea
Donald Trump continued his five-nation tour of Asia, landing in Vietnam today for the Asia-Pacific Economic Cooperation summit. This comes as Trump said on Thursday that he wants Russia’s help in getting North Korea to give up its nuclear weapons. In Korea, he attempted to visit the Demilitarized Zone, but his fleet of helicopters was turned back due to bad weather. Professor Bruce Cumings just returned from Seoul, South Korea, where Trump was met with protests. He is professor of history at the University of Chicago and the author of several books on Korea, including “Korea’s Place in the Sun: A Modern History.”

Will Trump Challenge Philippines President Duterte’s Deadly Drug War When They Meet in Manila?
Trump’s five-nation tour of Asia will include a stop in the Philippines to meet with President Rodrigo Duterte, who has been overseeing a controversial “war on drugs.” Since Duterte was elected in 2016, more than 7,000 people have been extrajudicially killed by police or vigilantes. While human rights groups have condemned Duterte, he has received backing from Trump, who invited Duterte to visit the White House. Human Rights Watch slammed the invitation, saying, “Trump has made himself morally complicit in future killings.” Raffy Lerma is an award-winning photojournalist who has documented Duterte’s “war on drugs.” He describes his work and the situation in the Philippines and says he hopes Trump will address the deadly crisis.

Bill McKibben on Future of the Paris Climate Accord & U.S. Role at COP23 Climate Talks in Germany
Democracy Now! heads to the U.N. Climate Change Conference in Bonn, Germany, and speaks with 350.org’s Bill McKibben. Several U.S. delegations are scheduled to attend despite the fact that Donald Trump says he is pulling the U.S. out of the landmark 2015 Paris climate accord. The Trump administration is sending officials to push coal, gas and nuclear power during a presentation at the U.N. climate summit. Meanwhile, a coalition of U.S. cities, companies, universities and faith groups have opened a 2,500-square-meter pavilion outside the U.N. climate conference called “We are Still In”—an effort to persuade other countries that wide swaths of the United States are still committed to the landmark 2015 Paris climate accord. McKibben also discusses his newly published first novel, “Radio Free Vermont: A Fable of Resistance.”