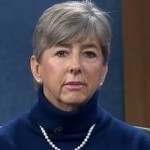 Expert: President Trump Calling His Accusers “Liars” Confirms Women’s Fears of Not Being Believed
Amid the torrent of sexual abuse allegations lodged by women against powerful men, Donald Trump rushed to the defense of Alabama Republican Senate candidate Roy Moore, who stands accused of multiple instances of sexual assault against minors. Meanwhile, CBS News, PBS and Bloomberg all said Tuesday that they’re firing veteran journalist Charlie Rose over multiple accusations of sexual harassment. On Capitol Hill, Congressmember Jackie Speier says she knows of at least two lawmakers who’ve engaged in sexual harassment and has introduced a bill to end a mandatory “cooling off period” before accusers can file claims. Jennifer Drobac is a professor and expert in sexual harassment law at Indiana University’s Robert H. McKinney School of Law.

Haitians Denied Protected Status Face Deportation to “Nation in Turmoil” After Earthquake, Hurricane
The Trump administration plans to revoke a special immigration program for nearly 60,000 Haitians, many of whom came to the United States after the devastating 2010 earthquake in Haiti. Their temporary protected status, or TPS, will now end in July 2019.

One thought on “Expert: President Trump Calling His Accusers “Liars” Confirms Women’s Fears of Not Being Believed”