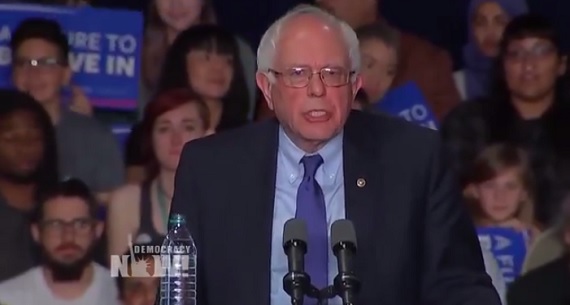 The only candidate to be snubbed by major news media Tuesday night.

Donald Trump and Hillary Clinton moved closer to securing their respective party’s nomination with a series of victories Tuesday night. As Trump won three states and Clinton four, Fox News, CNN and MSNBC played the speeches of all candidates but one — Bernie Sanders. This is despite Sanders in fact having won more primaries than every Republican candidate other than Trump.

Today’s show also considers the Republican Party’s next move after Pres. Obama nominated Merrick Garland to the Supreme Court. Garland is known to be a centrist, whose record on criminal justice in particular may be less liberal than many.

Also, North Carolina has enacted voter ID laws that are one of the country’s most controversial and restrictive. The law, which was passed by the Republican-dominated North Carolina state Legislature in 2013, limits the forms of ID acceptable at polling places. As a result, about 5 percent of the state’s registered voters, primarily African-American, are excluded from being able to cast a ballot.

Finally, Florida activist group The Dream Defenders have launched SquaDD2016. “We are the future of this yet-to-be-great country: black, brown, radical and tired as hell. Imagine with us, what would be possible if we ran for the highest offices in this country?”