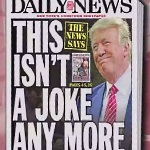 Donald Trump is being accused of inciting violence against his rival Hillary Clinton following remarks he made Tuesday, referring to “the Second Amendment people” preventing Clinton nominating justices. The comments were widely seen as a call to assassinate Clinton and sparked widespread outrage. The New York Daily News wrote: “This isn’t a joke any more. When Trump hinted gun-rights supporters shoot Hillary, he went from offensive to reckless. He must end his campaign.” 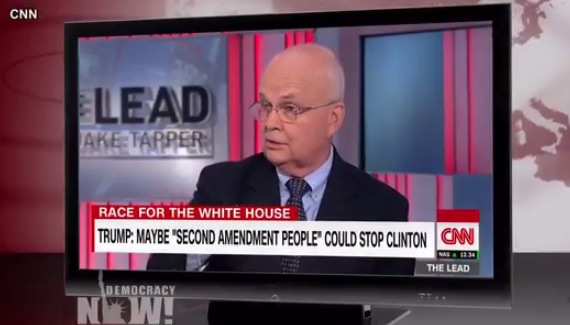 Former CIA chief General Michael Hayden on CNN: “If someone else had said that outside the hall, he’d be in the back of a police wagon now with the Secret Service questioning him.” Image: video still

Republican presidential nominee Donald Trump is being accused of inciting violence against his rival Hillary Clinton following remarks he made Tuesday during a rally in North Carolina. At the rally, Trump said, “Hillary wants to abolish—essentially, abolish—the Second Amendment. By the way, and if she gets to pick—if she gets to pick her judges, nothing you can do, folks. Although the Second Amendment people, maybe there is. I don’t know.” The comments were widely seen as a call to assassinate Hillary Clinton. The comments sparked widespread outrage from lawmakers, a former CIA chief and the New York Daily News, who wrote: “This isn’t a joke any more. When Trump hinted gun-rights supporters shoot Hillary, he went from offensive to reckless. He must end his campaign.”

David Cay Johnston began covering Donald Trump in the 1980s when he was working as the Atlantic City reporter for the Philadelphia Inquirer. Johnston’s new book, “The Making of Donald Trump,” looks at a side of Trump seldom covered in the press: his ties to the mob, drug traffickers and felons.

In Brazil, the U.S. women’s gymnastics team has pulled off a historic feat, winning the team gold medal by the widest margin of victory since 1960. The five-member gymnastics team is the most diverse the U.S. has ever sent to the Olympics. Simone Biles and Gabby Douglas are African-American. New Jersey-born Lauren Hernandez is of Puerto Rican descent. Madison Kocian and Aly Raisman are white.

But Simone Biles, Gabby Douglas and Lauren Hernandez are far from the first American Olympians of color to make history. Today the show examines a new documentary that looks at the 17 African-American athletes who, along with noted track and fielder Jesse Owens, defied Jim Crow and Adolf Hitler to participate in the 1936 Olympics held in Nazi Germany. Since then, the story of Owens’s four gold medals has dominated the narrative of African-American achievement in the ’36 Games.

In upstate New York, the suspected suicide of 70-year-old prisoner John MacKenzie has drawn attention to how the state is refusing to release aging prisoners who have a low risk of recidivism. MacKenzie reportedly hung himself in his cell at Fishkill Correctional Facility after he was denied parole the previous week. It was his 10th denial of parole since he became eligible in 2000.

Amy Goodman spoke with Kathy Manley, a longtime lawyer and advocate for prisoner rights who represented John MacKenzie in his court case against the New York state Parole Board. And here in New York, Mujahid Farid is lead organizer with the Release Aging People in Prison (RAPP) Campaign. He founded the group after he was released from prison in 2011, after serving 33 years on a 15-to-life sentence.