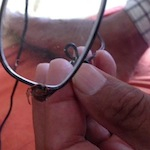 Editor’s Note: My friend Marcy Franck has returned home, but she has more stories about her experience volunteering with Syrian refugees on Chios, Greece. You can read her prior posts on Planet Waves here. Any donations made at her YouCaring page will continue to go directly to aid. — Amanda P.

Everyone lives in the camps, whether you are elderly, pregnant, seven days old, or have a broken leg. You live in your tent or, if you are lucky, a “container,” which is a portable plastic room with a small window and a door. 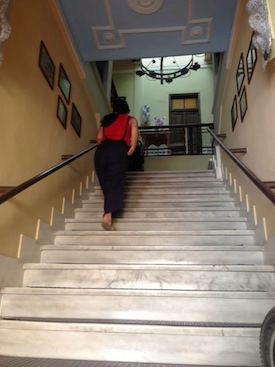 Entrance to the Hospital Hotel on Chios, Greece; photo by Marcy Franck.

But the UN attempts to help some of the most vulnerable people — those who are very sick and would absolutely not do well in the camp environment. For a select few of these people, there is the Hospital Hotel. Inside you’ll meet the kindest people in the world with stories that will shatter you. They are “survivors” in a way that my American self absolutely can’t relate to. They all have extensive medical needs, which is how the hotel got its nickname.

It’s a neat building in the center of town, walking distance from the other two camps, with rooms arranged around a central staircase.

Maja, a Swedish volunteer, took me to visit on my second day. She had made friends with one of the residents and, while she was visiting, got to know a handful of others who told her what they needed for supplies. Maja took me with her to deliver their requested items, which she had purchased with her own savings and packed into separate kitchen-sized garbage bags labeled by room number.

News spreads quickly in a small community, and after knocking on a couple of doors to deliver bags, more people came out to see what was going on.

It became a big party, with many smiles and children running up to us for a snuggle or a sticker. Many moms had asked for kid-sized hair elastics, and the shop had thrown in an entire bag for free. One of the greatest joys I’ve experienced while being here was having *enough* to give to everyone who *wants.* Kids from age 2 – 9 toddled up to me with smiles and kisses, and they all got several little hair bands. I must have made 17 pigtails and countless bracelets. 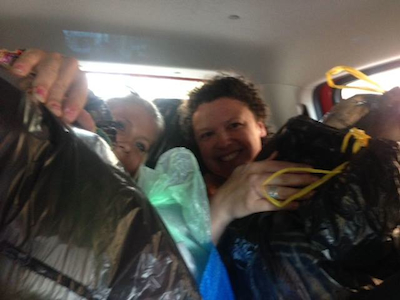 “Maja and I squeezed into the back seat to deliver the things Maja purchased for residents of the Hospital Hotel on Chios, Greece. She’s awesome.” Photo by Marcy Franck.

Then one mom asked if I had any baby shampoo. She hasn’t washed her newborn in several days, and his hair is getting nasty. Another mom asked if I might have any long-sleeved tunics for her, and also a pair of shoes for her older daughter, who was standing in front of me with cracked sandals.

I smiled and said sure, then reached into my notebook to write down their requests, along with sizes and their room numbers.

Ears and eyebrows perked up from across the room, and soon everyone had a special request for themselves, their kids, and their husbands.

No problem, I thought. I have money for this—helping individual families is exactly what I have allocated a portion of my fundraising money to. And while looking at babies wearing winter-weight clothing in 90-degree heat and kids wearing shoes way too big or small, I was thrilled to help however I could.

I started a page in my notebook for every room and, one by one, wrote down what they needed: Jeans size small, sandals size 22, shorts for a child aged nine. Sometimes I’d ask for a size and mom would shrug.

I’d figure it out. Nothing is impossible.

The Hospital Hotel: The Man From Room 257

I have been taking orders for 35 minutes. It would seem that having an opportunity to tell someone exactly what you need, as opposed to selecting one item from a box after you’ve queued for ages to get it, is downright outrageous. It is crazy. It is a very special gift indeed.

Women tug on my arm while I’m talking to their neighbors and children squeal “My friend! My friend!” while they jump up and down between me and the person I’m talking to. 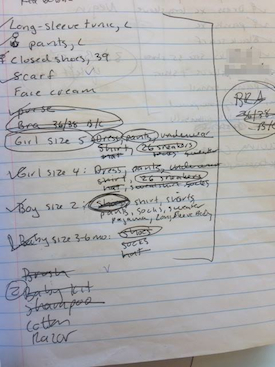 “An order for one room. I ended up with 15 pages just like it!” Photo by Marcy Franck.

No one seems to know their size. So I stand back and stare at their chests, then turn them around to see if their current bra has a tag with a size in it. Nope. Crap.

So I turn them around again and squint at their boobs with all the intensity of a voyeur inside a Victoria’s Secret dressing room. I guess I’ll just do my best.

Then Ahmed walks up to me and asks politely for my attention.

“Excuse me, Madam.” He says. He looks about 70 years old with a strong and kind presence.

The woman whose order I was taking backs away to let him speak.

“This woman here,” he says, gesturing to the woman next to him, whose list I had already written down, “is pregnant. Her husband died two months ago because he had stomach surgery and there were complications so, after two months, he died.”

Oh my God. I remember reading about her husband. The doctors wouldn’t fly him to Athens, where they send people whose medical needs surpass what they can provide on Chios. He died a terrible death, but volunteered to let a journalist document his story so the rest of the world could learn about the injustice. I saw a photo of his dead body along side his grieving widow, because she had stayed true to his wish that the world stay informed.

His widow, who was standing right in front of me, asking me to help her.

“She is nine months pregnant and wants to go to Athens to deliver her baby,” he said. “Her friend delivered her baby here but there was something wrong with it. So they took the baby to Athens and left her friend here. She doesn’t want to leave her baby. Can you help her?”

What. The. WHAT. They took a newborn and left the mother? What about bonding? What about breast milk? What about you just don’t ever do that? I’m hoping this is a story that got lost in translation, or a rumor, or anything but the truth.

I turned my gaze to the woman, who looked at me with a wide-open face as though I held the answer to her giant concerns. I put my hand on her arm. I had no idea what to do next.

“I’ve been here two days,” I said to Ahmed. “I have no power but I can ask some people and let you know what I learn. What room does she live in?” I asked.

I turned to her page in my book and added, “newborn clothes, diapers” to her list.

Every hour brings a new reminder that the help I can give is not the help they actually need. But I remind myself that volunteers are here to make lives more comfortable in the here and now, hoping the world’s governments will pull themselves together quickly enough to end this misery soon. 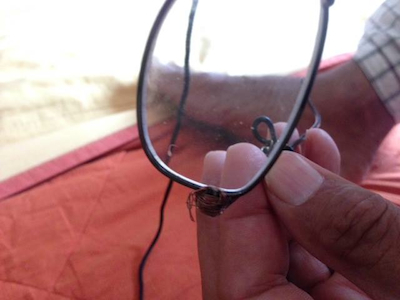 His broken glasses, held together by thread. Photo by Marcy Franck.

Then I ask him what he needs, but he says he doesn’t want anything. He shows me two tablets he’s just received from the doctor and says, “I have angina. It hurts to lie down, and it hurts to walk. But this is all they gave me for treatment—what am I supposed to do with these two tablets?”

I tell him that I just don’t know. I need to learn how to say this in Arabic and Farsi, because it is often the only response I have. I had just met a mom whose 3-year old daughter had a 104 fever, and received only one dose of anti-fever medicine. She asked me the same question Ahmed is asking me now: what was she supposed to do when the medicine wore off?

I told him I would look into it, and added it to my growing list of questions for which no one can find answers.

Then I press him to see if I could bring something that would make him more comfortable. Finally he says he could use a new pair of sneakers and a pair of sandals for his wife. Then he gets his reading glasses and shows me that they have fallen apart and he put them back together with a thin wire on both sides.

“What is your prescription?” I ask.

“Thank you,” he says, and puts his hand on my shoulder. “Thank you.”

*****
Learn the story behind the widow’s husband who died in Chios.

I am home now but will continue to post stories from my time volunteering for refugees in Greece. I extended my fundraiser to fill five important needs: strollers, suitcases, food for new arrivals at boat landings, organized activities for unaccompanied minors, and the Refugee Garden Kids in Istanbul.

To learn about the Refugee Garden Kids in Istanbul — and about how you can help those children and refugees on Chios, Greece — click here.

One thought on “The Hospital Hotel, Parts 1 and 2”