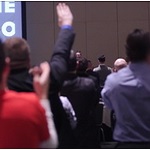 A video leaked Monday from a self-proclaimed “alt-right” conference that took place over the weekend in Washington, D.C., shows hundreds gathering to celebrate Donald Trump’s victory and raising their arms in the traditional Nazi salute and saying “Heil victory!”

A video leaked Monday from a self-proclaimed “alt-right” conference that took place over the weekend in Washington, D.C., shows hundreds gathering to celebrate Donald Trump’s victory and raising their arms in the traditional Nazi salute and saying “Heil victory!” Leaders of the alt-right movement have been emboldened since Trump’s election, particularly since he named Steve Bannon to become his chief strategist after first being his campaign manager.

Bannon is the former head of the right-wing news outlet Breitbart Media. Deborah Lipstadt, Dorot professor of Holocaust studies at Emory University, says Bannon’s appointment is “the most depressing of almost anything I’ve heard thus far.” Lipstadt is also the subject of a feature film now in theaters called “Denial,” which is based on a court case in which she was sued by a leading Holocaust denier.

Also today: A sweeping new report reveals ties to slavery and the displacement of the Native Americans at one of the country’s top colleges. The findings about 250-year-old Rutgers University were published in a new book, “Scarlet and Black, Volume 1: Slavery and Dispossession in Rutgers History.” It details the history of some of the institution’s founders, presidents and trustees as slave owners, anti-abolitionists and participants in slave trading.

Rutgers is one of several colleges and universities across the country now grappling with their historical ties to slavery, including Georgetown, Yale and Harvard. Juan Gonzalez speaks with Marisa Fuentes, director of research for the team that produced “Scarlet and Black.” She is an associate professor of women’s and gender studies and history at Rutgers.

There is growing resistance to Trump’s vow to detain and deport millions of people from the United States. Mayors from New York to Chicago to Seattle say they will refuse to cooperate even as Trump promises to cut funds from so-called sanctuary cities. Meanwhile, the movement is growing for “sanctuary campuses.” During his campaign, Trump also said he would reverse President Obama’s executive orders, including DACA, Deferred Action for Childhood Arrivals, which has shielded 750,000 young people from deportation.