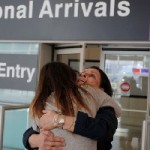 Donald Trump has signed a new executive order temporarily banning all refugees, as well as people from six majority-Muslim countries, from entering the United States. In contrast to the fanfare that accompanied Trump’s rollout of January’s ill-fated travel ban, Monday’s signing was a decidedly more low-key event.

This is Still a Muslim Ban: Trump’s New Executive Order Decried for Discriminating Based on Religion
Donald Trump has signed a new executive order temporarily banning all refugees, as well as people from six majority-Muslim countries, from entering the United States. In contrast to the fanfare that accompanied Trump’s rollout of January’s ill-fated travel ban, Monday’s signing was a decidedly more low-key event. Trump signed the executive order out of public view. Secretary of State Rex Tillerson later outlined the details. The new ban applies to people from Syria, Sudan, Iran, Somalia, Libya and Yemen, but, unlike the original ban, not those from Iraq. Trump’s first Muslim travel ban was blocked by the courts in February amid massive nationwide protests. Unlike the first ban, the new executive order will not apply to people from the six countries with green cards or who already have a visa. Immigration and human rights advocates say the new ban still discriminates against Muslims and fails to address some of their concerns with the previous order. For more, we speak with Faiza Patel, co-director of the Liberty and National Security Program at the Brennan Center.

The GOP Fix for Obamacare: Rich Get Tax Breaks While Millions of Others Lose Healthcare
House Republicans have unveiled long-awaited legislation to repeal much of the Affordable Care Act—also known as Obamacare—including its expansion of the Medicaid program for the poor. The proposal includes a large tax break for insurance companies that pay their CEOs over $500,000 per year. It also defunds Planned Parenthood and eliminates abortion coverage. The Republican proposal does retain Obamacare’s requirement that insurers cover people with pre-existing conditions. However, it scraps the revenue-generating mechanism that makes this possible: the individual mandate, which required all Americans to sign up for health insurance or pay a fee. President Donald Trump and fellow Republicans have repeatedly promised to repeal and replace Obamacare, but their efforts have faced internal divisions as well as sustained outcry from constituents at town hall meetings across the country.

SCOTUS Deals Setback to Trans Rights, But Trans Teen & Activist Gavin Grimm Vows to Push Forward
In a setback for the transgender rights movement, the U.S. Supreme Court has announced it is sending a landmark transgender case back to a lower court. The suit was brought by Virginia transgender high school student Gavin Grimm, who sued his local school district over its policy forcing him to use a separate, single-stall restroom that no other student was required to use. In a one-sentence order, the Supreme Court vacated an appeals court decision that had ruled in Grimm’s favor. The ruling comes less than two weeks after President Trump rescinded President Obama’s directive telling public schools to let transgender students use the bathrooms matching their gender identity.