Pakistan has launched a paramilitary operation following the Easter Day bombing in Lahore that killed 72 people, including 29 children. Another 340 were injured. A Taliban splinter group has claimed responsibility. 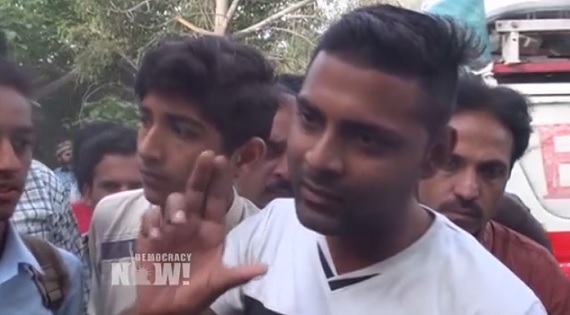 An eyewitness to the Lahore bombing, Ikram Arif, talks about the explosions. Image: video still

Pakistan has launched a paramilitary operation following the Easter Day bombing in the country’s second-largest city that killed 72 people, including 29 children. Another 340 were injured. A Taliban splinter group has claimed responsibility for the attack on a crowded amusement park in Lahore. The attack occurred as members of the minority Christian community gathered to celebrate Easter Sunday. A spokesperson for the attackers said they targeted Christians, but most of those killed were actually Muslim.

Amy Goodman spoke to veteran activist and author Tariq Ali about the attack and its motivation. Ali had this to say:

Theologically, there is absolutely nothing to justify this. This is a political assault on the country’s culture, its life, to try and create a jihadi, Islamic State-type republic. And this group, this splinter group, has expressed its admiration for the Islamic State, or Daesh, and regard themselves as its followers in Pakistan. So we’re now seeing the internationalization of a conflict that began in Iraq and created this group, now attracting others because it carries out these terrorist attacks in the Middle East and, of course, in Paris and in Brussels. It’s part and parcel of the same problem.

An interview with Glenn Greenwald from last week also appears on today’s show. Greenwald spoke on the dispute between the FBI and Apple, now resolved after the FBI claimed they had accessed the phone in question by themselves. He mentioned the inconsistency of Silicon Valley corporations’ actions before and after the Snowden revelations:

Once we were able to shine a light on the cooperation between Silicon Valley and the NSA as a result of Edward Snowden, there was a huge cost to these companies, which was that people around the world would be unwilling to use their services and would instead move to South Korean or German or Brazilian social media companies that protected their privacy. And so these companies needed to say, “We are willing now to protect your privacy by putting encryption products into our products that will not let the government invade your communications and see what you’re doing.” And there is now a serious wedge between the U.S. government, on the one hand, and Silicon Valley, on the other—not because these companies suddenly care about privacy. They don’t care about privacy at all. It’s because they perceive it as being within their self-interest to demonstrate a commitment to privacy. And that has created a real difficulty for the NSA and for its allied agencies around the world to be able to intrude into people’s private communications.

Finally, Amy speaks with Chase Strangio (who recently published this article) and Payton McGarry, who are both involved in the ACLU’s lawsuit to get North Carolina’s transphobic “bathroom bill” off the books. The bill would force transgender (and intersex) people to use the facilities for the gender on their birth certificate rather than their actual gender identity — which, as Strangio points out, could expose them to harassment and the risk of serious harm.