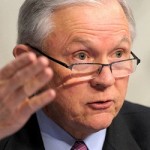 The Trump administration has unveiled its latest attempt to target sanctuary cities that are refusing to help federal agents detain and deport undocumented immigrants. On Monday, Attorney General Jeff Sessions said the Justice Department would withhold billions of dollars in grants to law enforcement agencies in sanctuary cities.

ICE Retaliates Against Immigrants in Austin After Sheriff Limits Cooperation with Federal Agents
Texas U.S. Magistrate Judge Andrew Austin said in open court that federal agents had alerted him that ICE would be targeting the area of Austin, Texas. The raids would be retribution for Travis County Sheriff Sally Hernandez’s new policy that limited cooperation between local and federal authorities. Austin City Councilmember Gregorio Casar gives an update. When he first won election in 2014, he was the youngest councilmember in the city’s history.

As ICE Retaliates Against Austin, Learn How New Haven Fought Back Against a 2007 ICE Crackdown
In 2007, the New Haven City Council and mayor agreed to adopt the first municipal ID card in the nation. The move sparked fierce backlash from federal immigration authorities. Forty-eight hours after the Board of Alders approved the new ID cards, ICE conducted the largest raid in the history of the state, sweeping across immigrant neighborhoods, kicking in doors and arresting 32 people. Speaking on how the community fought back against the illegal raid is Michael Wishnie, clinical professor of law at Yale Law School, where he oversees the Worker and Immigrant Rights Advocacy Clinic.

Rebecca Solnit on Climate Change, Resistance, Misogyny and “The Mother of All Questions”
Donald Trump is expected to sign an executive order Tuesday to dismantle a slew of climate rules put in place by President Obama. The executive order marks the first step to undo President Obama’s Clean Power Plan to limit power plant emissions. The rule was seen as a critical element of the U.S. pledge to cut emissions as part of the 2015 Paris Agreement. Trump’s executive order is also expected to scrap regulations limiting methane emissions and open up the door for more coal mining and fracking on federal lands. Guest Rebecca Solnit, one of the nation’s most celebrated writers, has spent years writing about climate change. She’s the author of more than 20 books, including, most recently, “The Mother of All Questions.”