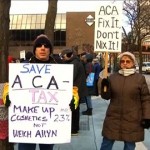 Healthcare or Wealthcare? 24 Million to Lose Insurance Under GOP Plan While Rich Get Big Tax Breaks
A startling new report from the Congressional Budget Office is projecting 24 million people will lose health insurance coverage by 2026 under the Republican plan to replace the Affordable Care Act. Fourteen million people would lose health insurance in the next year alone. While the White House rejected the CBO findings, Politico is reporting the White House’s own analysis predicts 26 million people will lose coverage under the bill over the next decade. According to the CBO, the bill would reduce the deficit by $337 billion, but one of the biggest beneficiaries of the Republican bill will be millionaires. A new study by the Tax Policy Center shows people in the top 0.1 percent would get a tax cut of about $207,000 under the plan. House Minority Leader Nancy Pelosi accused Republicans of attempting to push through the biggest transfer of wealth in the nation’s history.

ALEC & For-Profit Health Industry Embrace GOP Bill Despite Opposition from Doctors & Nurses
As the Congressional Budget Office projects 24 million people will lose health insurance coverage by 2026 under the Republican plan to replace the Affordable Care Act, we look at who stands to benefit from the law. Lee Fang, investigative journalist at The Intercept, talks about how the American Legislative Exchange Council (ALEC) and the for-profit medical industry is backing the plan despite opposition from health providers. Plus, he looks at how the bill is just the first of a three-part plan to repeal Obamacare.

Was Firing of U.S. Attorney Preet Bharara Done to Cover Up Probes of Trump & Fox News?
Attorney General Jeff Sessions asked for the resignations of 46 U.S. attorneys on Friday, angering the prosecutors, who say they weren’t warned in advance. One of the most high-profile prosecutors asked to resign, United States attorney in Manhattan Preet Bharara, refused to step down Friday and was quickly fired. Bharara’s termination came as a surprise, since Donald Trump met personally with Bharara at Trump Tower last November and assured him he could remain at his post. The unusual circumstances of Bharara’s dismissal prompted Democrats to suggest it was politically motivated. Preet Bharara’s dismissal came as his office was probing Fox News after it allegedly failed to inform shareholders about numerous settlements in sexual harassment and assault cases. The dismissal also came less than a week after government watchdog groups sent a letter to the Manhattan prosecutor’s office asking for an investigation into whether President Trump violated a clause of the Constitution barring federal employees from receiving benefits from foreign governments. In addition, Preet Bharara was one of 18 U.S. officials barred from entering Russia. Russian President Vladimir Putin was reportedly angered by Bharara’s prosecution of Russian arms dealer Viktor Bout.

Is Jared Kushner Breaking the Law with $400M Real Estate Deal with Firm Tied to Chinese Gov’t?
A company owned by President Trump’s senior adviser and son-in-law Jared Kushner will receive more than $400 million from a Chinese firm in a real estate deal that many experts are calling unusually favorable. The payout from the Anbang Insurance Group is part of a $4 billion deal at Kushner’s Manhattan office tower at 666 Fifth Avenue. Bloomberg reports Anbang has links to the Chinese power structure and that past investments by the company in New York real estate have drawn federal review. Critics say the transaction could be a “sweetheart deal” meant to curry favor with President Trump. Investigative journalist Justin Elliott of ProPublica has been closing examining Kushner’s possible conflicts of interest.

From Lobbyists to Reality Show Stars, Meet the Hundreds of Officials Trump Has Quietly Installed
ProPublica’s Justin Elliott has been looking into the hundreds of officials Trump has quietly installed across the government. He describes the backgrounds of these officials in a recent piece for ProPublica: “A Trump campaign aide who argues that Democrats committed ‘ethnic cleansing’ in a plot to ‘liquidate’ the white working class. A former reality show contestant whose study of societal collapse inspired him to invent a bow-and-arrow-cum-survivalist multi-tool. A pair of healthcare industry lobbyists. A lobbyist for defense contractors. An ‘evangelist’ and lobbyist for Palantir, the Silicon Valley company with close ties to intelligence agencies. And a New Hampshire Trump supporter who has only recently graduated from high school.”